(Minghui.org) A forum on state-sanctioned organ harvesting atrocities in China was hosted by the World Organization to Investigate the Persecution of Falun Gong (WOIPFG) in Berlin, Germany on October 28. Official human rights dialogues will be held in early November between China and Germany as well as between China and the European Union.

Local politicians and medical professionals advocated for more attention to be focused on the illicit organ harvesting practices in China whereby prisoners of conscience, most of whom practice Falun Gong, are custom killed for their organs. They indicated they were working on a bill to ban travel to China for organ transplants, and to deny entry to those involved in illegal organ trafficking. 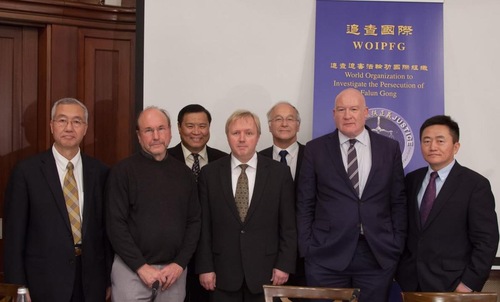 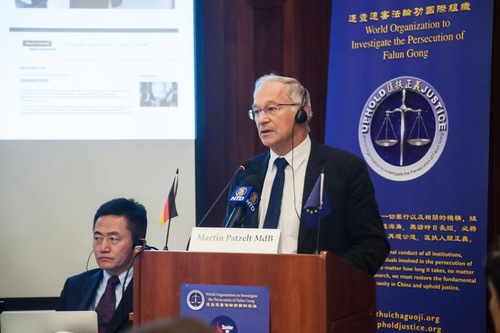 MP Martin Patzelt is from the former East Germany. When he was young he believed that the communist party would collapse. He remarked in the opening of the forum, “Live organ harvesting has been going on for more than ten years. It has not reduced but has increased. The many ways the news has been spread to the world are still not enough. How can we tolerate this crime and keep silent?”

He continued, “It is unprecedented that a country participates in forced live organ harvesting for profit. If we do not work for human rights on this issue, we have to ask ourselves whether we are even human.”

MEP: The Persecution of Falun Gong Is Horrible 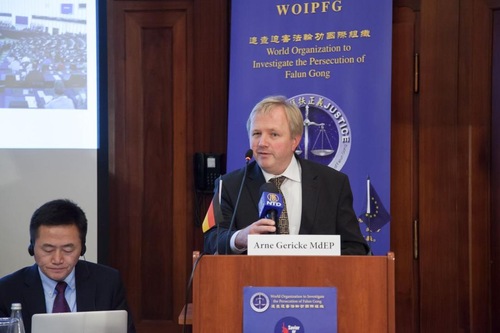 MEP Arne Gericke grew up in former East Germany and experienced communist party control. He was the co-sponsor of the written declaration of European Parliament calling on the European Union to take action to stop China’s organ harvesting from prisoners of conscience and to conduct an independent investigation.

He stated that the Chinese regime has conducted the brutal persecution of Falun Gong for 17 years. The live organ harvesting is horrible. He stressed that Europe cannot ignore such a criminal act.

MP: Perpetrators Must Be Brought to Justice

MP Christoph Straesser sent a letter to the forum in which he stated that, “China is one of the countries with serious organ trafficking. The Chinese government has not given a reasonable explanation to rebut the allegation of its human rights violation.”

“Evidence shows that organ trafficking is ongoing in China. The crimes of forced live organ harvesting of inmates are continuing. The hospitals making a profit from organ trafficking exist as usual. Such infringement of human rights must be stopped and the perpetrators must be brought to justice.”

U.S. senior House Representative Chris Smith also sent a letter to the forum. He stated that China’s effort to eliminate Falun Gong these past 17 years is the biggest crime of the 21st century, and is the biggest disgrace in Chinese history. 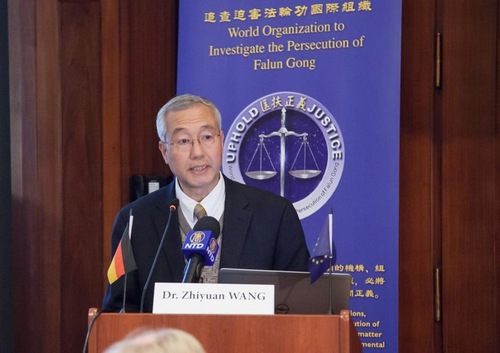 Director Zhiyuan Wang of WOIPFG introduced the newest results of the investigation. He pointed out, “China's organ transplantation increased exponentially since the CCP's initiation of the persecution in 1999. The waiting time for organs is extremely short. The investigation was based on the media reports in China and websites of hospitals and other official sources. Based on the Chinese media reports, live organ harvesting from Falun Gong practitioners is continuing.”

The waiting time for a liver transplantation is two to three years on average in many countries. The waiting time in China was one to two weeks after 1999. The shortest was only a few hours. One can even order a kidney, liver and heart. This indicates that there is a large live donor bank, in which the donors have no freedom and wait to be killed for their organs.

Charles Li, director of Public Relations of WOIPFG, was incarcerated for three years in China for his belief in Falun Gong. He played a few investigative phone records to illustrate the participation of the army in the live organ harvesting.

IT Expert of Medical Literature: Chinese Organ Transplantation Is Not Transparent

Arne Schwarz, an IT expert on medical literature, conducted an investigation on China's organ harvesting and the medicines used in the transplantation from Western pharmaceutical companies.

How to Stop Live Organ Harvesting

In the question and answer session, MP Patzelt said he would strive to pass a resolution in German Parliament to condemn the CCP's live organ harvesting.

To the question “what can we do in Western countries,” he answered that in addition to the resolution, concrete action is needed. He and MEP Gericke both indicated that western pharmaceutical companies providing drugs to China and hospitals providing training to Chinese doctors must be warned to not be involved in this inhumane crime. The other way is to stop Germans from traveling to China to obtain organ transplants.

In addition, those involved in the live organ harvesting, including Chinese doctors and officials must be denied entry when they travel to Germany.