(Minghui.org) Falun Gong practitioners called for bringing Jiang Zemin, former head of the Chinese Communist Party (CCP), to justice one day before the the 71st UN Summit in New York, on September 25, 2015. Jiang initiated the persecution of Falun Gong in 1999, and abused his power to orchestrate the persecution in China.

The practitioners held large banners across from UN Headquarters and the Waldorf Hotel, where Chinese President Xi Jinping is staying while attending the summit. The banners were worded, “Falun Dafa Is Good,” “Truthfulness-Compassion-Forbearance,” “Stop the Persecution of Falun Gong,” and “Bring Jiang Zemin to Justice.” 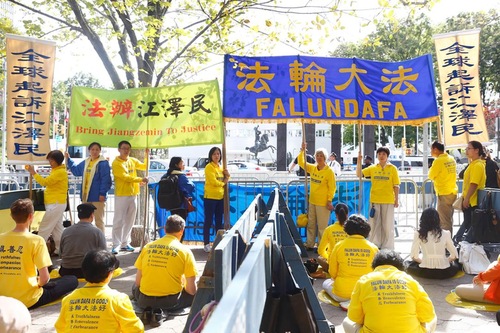 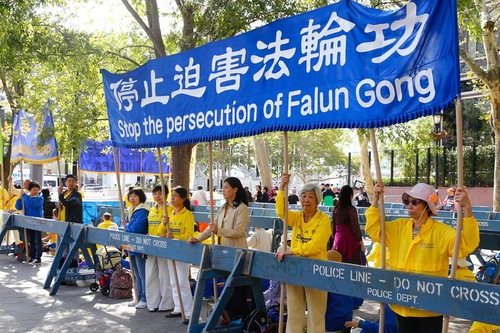 Falun Gong practitioners call for bringing Jiang Zemin to justice to stop the persecution across from UN Headquarters on September 25, 2015. 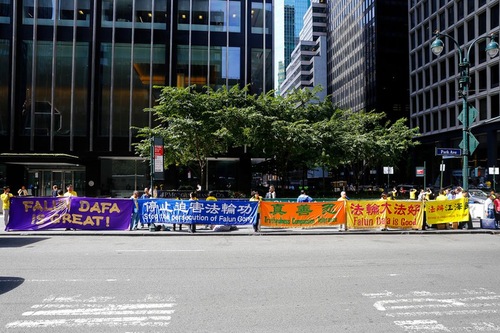 Falun Gong practitioners hold large banners beside the road across from the Waldorf Hotel, where Chinese President Xi Jinping is staying in New York while attending the UN Summit. 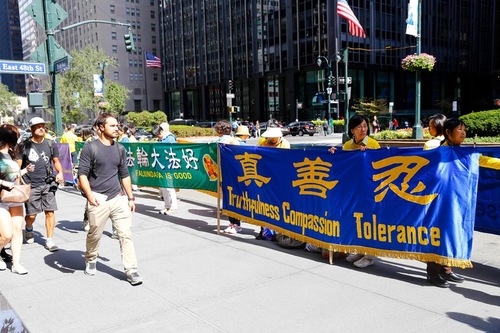 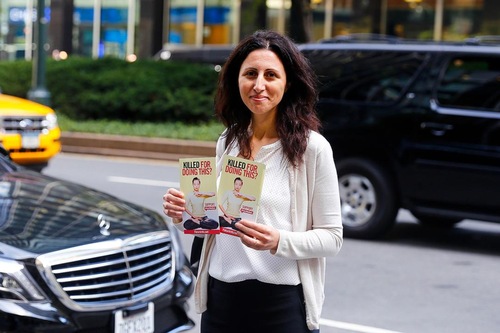 He said, “I come here to let Xi Jinping hear our voice to stop the persecution and bring the perpetrator Jiang to justice.”

Passersby Learn the Facts of the Persecution

A police officer heard someone mentioned the “self-immolation incident” and felt something was wrong. He asked practitioner David in front of the Waldorf Hotel about this. David explained to him about the CCP-staged self-immolation incident in 2001 to frame and defame Falun Gong. The CCP's defaming propaganda misleads many people, and instigated hatred toward Falun Gong. The police officer appreciated David’s information about the facts, and wished Falun Gong success.

Passerby George asked David many questions, as he was interested in Falun Gong. David answered him, told him about the Falun Dafa website, and suggested that he visit the Tianti Bookstore (220 W 30th street, New York, NY 10001) to buy Falun Gong books.

Practitioner Yi Rong said that Falun Gong practitioners came to the UN Headquarters before the summit every year to call on world leaders to urge the CCP to stop the persecution. She said, “Xi Jinping will speak at the UN summit. We take this opportunity to urge him to bring Jiang to justice.”

The peaceful appeal will continue for three days, until September 28, 2015.