(Minghui.org) Today's news from China includes incidents of persecution that took place in 12 cities or counties in 7 provinces. According to this report, 11 Falun Gong practitioners were subjected to mistreatment during their detention, and at least 16 practitioners were illegally arrested. 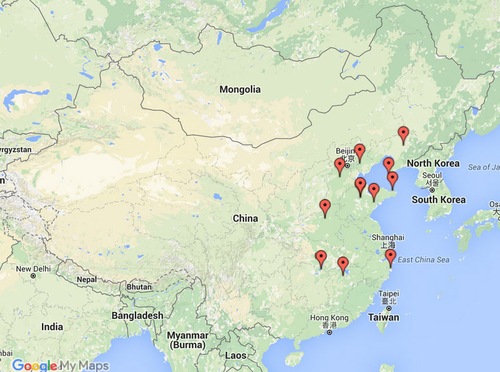 Mr. Shan Yicheng, Mr. Liu Wenming, Mr. Du Qihai, and Mr. Zhang Menglei were sentenced in the Gaomi Court in June 2015. They are still in the Gaomi Detention Center.

Ms. Li Xiupei was arrested by officers from the Dugong Police Station in the Tiexi District when she was distributing Falun Gong informational materials on September 5, 2015. She is being held in the Zaohua Detention Center.

Officers from the Huayuankou District Police Department arrested Mr. Guo Shuchun, his wife Ms. Dong Yufang, their son Mr. Guo Jixiang, and their granddaughter at home in Daxingcheng Village in Mingyang Town on the morning of September 7, 2015. The officers confiscated a printer and a computer.

Ms. Dong and her granddaughter were released. Mr. Guo and his son were taken to the Zhuanghe Detention Center.

Mr. Zhang Yanhui was sentenced to seven and a half years in prison in the Jinshui District Court in June 2015. He is in the Zhengzhou No. 3 Detention Center.

Ms. Hao Yabo from Xinanzhai Village, Xindianzi Town, was arrested by officers from the Xindianzi Police Station on the afternoon of September 2, 2015. She was held in the Zunhua Detention Center for five days.

Ms. Chen Jufang, female practitioner Aihua, and another practitioner from the Shipu area were arrested for suing Jiang Zemin by officers from the Xiangshan County Police Station on September 6, 2015. Ms. Chen was released the same day.

Ms. Jiang Yuxia was arrested by officers from the Weihai 610 Office at the end of July 2015 for filing a lawsuit against Jiang Zemin with the local Procuratorate. The police confiscated her Falun Dafa books and about 1,000 yuan in paper bills with facts about Falun Gong written on them. She was detained for 15 days.

Mr. Chen Qingshan was arrested at home by officers from the Qianlianghu Town Justice Agency in the Junshan District on the morning of September 7, 2015. He is in the Xiuhuayuanshanzhuang Brainwashing Center in Yueyang County.

Ms. Fan Qingyun was arrested by officers from the local 610 Office the same day. She is held in the same brainwashing center.