South Korea: Falun Dafa Practitioners Share How They Benefited from the Practice

(Minghui.org) The annual Falun Dafa Experience Sharing Conference in South Korea was held on September 13, 2015, in Youth Town, Cheongju City. Over a thousand practitioners attended the conference. They shared how their lives and health dramatically improved after they started to practice. 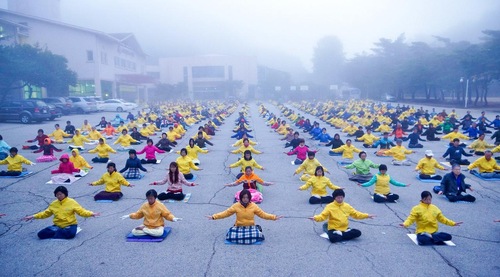 Practitioners exercise together on the day of the conference. 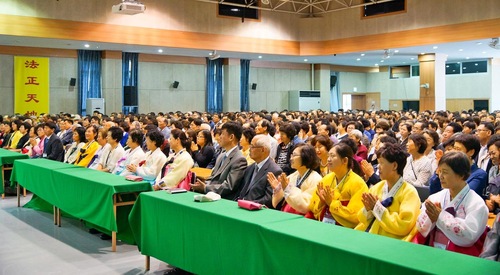 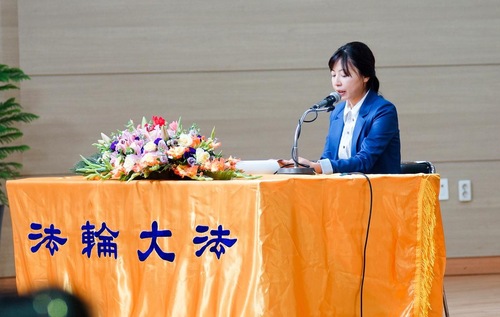 A practitioner shares her cultivation experiences.

Looking Within When Facing Conflicts

Ms. Jin Chaoyi from Gyeongbuk Yeongju was able to look within for the first time on the day she first read the book Zhuan Falun. Before that she believed that she was always right.

Her son was honest but not eloquent, and she was always disappointed in him. After she began cultivating, she realized that her high expectations for her son put him in a very difficult position. When she was able to look within and see her own problems, her son started to pass competitive tests one after another.

Ms. Jin used to complain about her family for making her life miserable. She also didn't get along with her co-workers. After she became a practitioner, the changes in her attitude were so significant that her husband and children became practitioners as well.

Being Selfless Changed My Life

Mr. Qi Rongji from Seoul used to have hypertension and obesity, and was slightly depressed. His seeking of medical help failed. The first time he did the exercises, his fitness level improved significantly. After he read the book of Zhuan Falun, his ailments disappeared and he lost a lot of weight. He became optimistic and threw away all his medications.

Being a bus driver, he would often speed to be on time. He was used to frequently violating traffic rules. One day he thought of the Falun Dafa teaching of being altruistic, and he began letting cars cut in front of him. Surprisingly, his route became much smoother and he was easily able to stay on his schedule. He stopped being anxious and violating the traffic rules.

He overcame his sense of inferiority and helped sell 50 Shen Yun Performing Arts tickets to one of his long-time customers in 2010. He was thankful for Teacher's encouragement.

Ms. Liang from China was so feeble that she was not allowed to eat many kinds of food. She also had arthritis and stomach pain. After she became a practitioner, she could eat anything she liked, and her illnesses disappeared. Following the principles of the teachings, she stopped complaining about her husband's job and quarreling with her customers.

She came to South Korea in 1999 to avoid the persecution. She clarified the facts about the persecution of Falun Dafa at Incheon Port every day. She learned how to speak softly and kindly to the Chinese tourists who refused to listen. Many of them eventually quit the Chinese Communist Party and its affiliated organizations.

Getting Along with Son and Wife

Mr. Jin Hongkun's life was in despair after his business failed twice. He also had frequent family troubles. The day he read the book Zhuan Falun he understood why his life was so hard.

One day he yelled at his son because he didn't like the way he dressed. He later looked within and knew that he was not being compassionate and tolerant. After he stopped accusing and started to rationally and gently express his opinions, his son began to dress properly and invited him to participate in serious conversations. They began to trust each other.

When he first started practicing, his wife often fought with him for no reason. He was often annoyed, but he realized it was a test. One day his wife threatened to divorce him and left home. He stayed calm and took care of their son. A few days later his wife came home like nothing had happened and started to cook dinner. Her attitude gradually changed.

In the process of selling Shen Yun tickets, he learned to eliminate his attachments to fame and unnecessary worries. He sold tickets to his coworkers without disrupting work. He also promoted tickets among his relatives. Because he was always enthusiastic in helping with family affairs, he was very welcome among other family members. As a result he sold dozens of tickets. He realized that the positive image of a practitioner was often key to awakening people.

Improving Through Clarifying the Truth

Mr. Xin Xiangjiao began to work aggressively supporting practitioners in China who are suing former Chinese dictator Jiang Zemin for their pain and suffering. Jiang launched the persecution of Falun Dafa 16 years ago, which caused millions of practitioners and their families irreparable loss. In the process of collecting signatures for the petition to support the practitioners, he had to put up with many people with negative attitudes.

“Without the petition supporting lawsuits against Jiang, I would never have seen the attachments of competitiveness, jealousy, and indifference in myself. Teacher said that the truth clarification work we do is connected to our personal cultivation. Everything I do is for my own good,” said Mr. Xin.

“The looks on people's faces stopped bothering me. I now greet them openly and nobly. I make eye contact and tell them why we should support the movement of suing Jiang. Most of the time people happily sign the petition without hesitation. They only hesitate when I do.”

Practitioners wished Teacher a happy Moon Festival after the conference.