Toronto, Canada: Showing the Beauty of Meditation at Queens Park

(Minghui.org) Eighty-six-year old Mr. Chen Deli, a Falun Gong practitioner from Toronto, sometimes has to show people his ID card when he tells them his age. 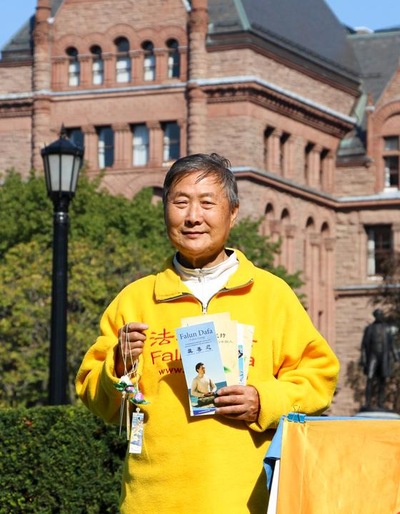 “I had hypertension, high cholesterol, and diabetes 20 years ago, and I thought that I would die before 70,” Mr. Chen Deli said. “I started to practice Falun Gong in 1997, which healed all of my diseases. I feel young now.”

Mr. Chen goes to Queens Park every day at 5 a.m. and does Falun Gong exercises with a group of practitioners. After the exercises, he spends his day telling tourists about Falun Gong and exposing the brutal persecution of the meditation practice in China.

The Chinese Communist Party launched the suppression of Falun Gong in 1999. Since then, the Party has initiated propaganda campaigns attacking Falun Gong–not only inside China, but also in the international community. Falun Gong practitioners believe that letting people know the truth is the best way to stop the persecution. 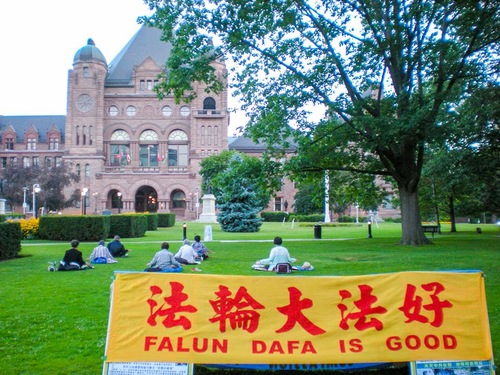 Queens Park, which the locals call the “people's park,” is located east of the University of Toronto campus. Groups of tourists from all over the world accept Falun Gong materials and learn the exercises at this park every day. People also sign the petition to condemn the persecution still going on in China.

For many of those traveling from China, it is their first time talking to Falun Gong practitioners since the persecution started. After learning about the brutality of the persecution, many of them choose to withdraw their memberships in the Communist Party. 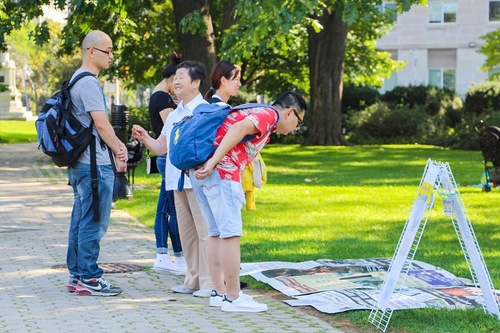 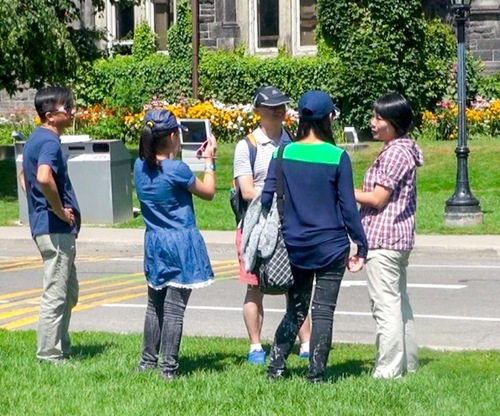 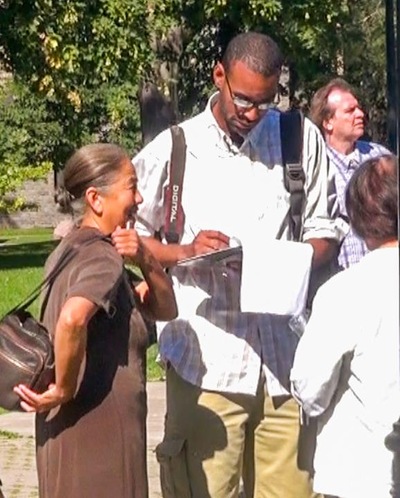 Ms. Wang Jinju, a local practitioner, talks to people and teach the exercises almost every day at Queens Park. She is glad that many Chinese tourists nowadays know what Falun Gong really is, and some even want to learn the exercises despite the severe persecution in China.

“A few days ago, a dozen Chinese tourists stopped at our display boards. They took some materials and asked me if I could teach them the exercises,” Ms. Wang said. “Of course I did. We went through the five sets of exercises, and they told me that they would continue practicing after they go back to China.” 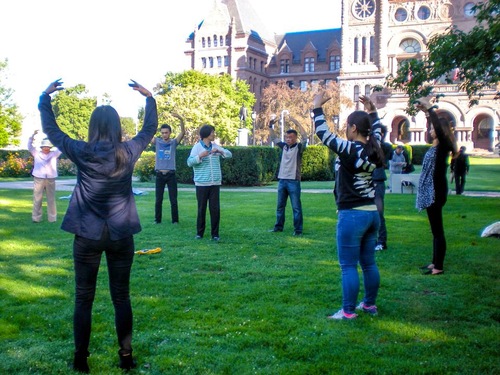 A group of Chinese tourists learn the Falun Gong exercises.

“One morning, an older couple stopped at our site. They read our display boards carefully, so I approached them and handed them a flyer. They politely refused to take it, but were willing to talk to me.”

“The husband pointed at our banner, which read 'Falun Dafa is good,' and asked me how so. He also asked me how Falun Gong is different than Taichi. I told them that Falun Gong teaches 'Truthfulness-Compassion-Forbearance,' and that we prioritize improving our moral standard, which will improve not only our spirit but also our physical health.”

“The husband asked me, 'Are you about 60?' I told him that I am already 86, and that my health shows the power of Falun Gong. They didn't believe me, so I showed them my I.D. card. They were so surprised, and asked me for a flyer that they had refused earlier. They said that they will go find more information about Falun Gong online.” 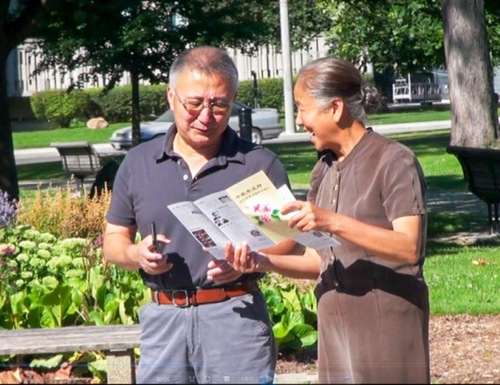 A practitioner tells a Chinese tourist about Falun Gong.

“One day, a lady asked me if the Chinese government really harvests organs from Falun Gong practitioners for profit. I showed her all kinds of investigations and evidence. She shed tears and decided to quit the Party,” Ms. Zhou said.

“Her husband, however, told me that he was a party official. He asked me how could he make a living if he quit the Party. I told him that many high-ranking Party officials nowadays are looking for ways out, because they know that the Party will soon fall.”

“We talked for a long time, and I told him about the corruption in China, which he actually knew pretty well. He asked me if I had quit. I said that I used to be a Party official too, but I realized that I had been deceived by the Party for many years, so I left it behind.”

“It seems that my experience encouraged him. He agreed to quit the Party.”

Practitioners are often encouraged by local policemen to keep up their efforts.

Ms. Wang Jinju said that they used to do the exercises and talk to tourists in the morning, and leave around noon.

“But one day, a policeman pointed to our banner and said slowly in Chinese, 'Falun Dafa is good. You can stay until 5 p.m.' We realized what he meant—more people would pass by after that time, and therefore more people can see the beauty of Falun Gong. Now, we stay until after 5 p.m. every day.”

Mr. Chen Deli recalled, “One day, two police officers stopped at our banner. They both gave us a thumbs-up and said to me, 'Falun Dafa is good.'”

“How wonderful it would be, if policemen in China would treat Falun Gong like that,” Mr. Chen said. “I believe that that day will come soon, if more and more people know what Falun Gong really is.”

Queens Park is only one of the places where practitioners introduce Falun Gong to the public. Hundreds of practitioners are doing the same at many tourist spots in Toronto, such as the CN Tower, Pacific Mall, and Centre Island.