(Minghui.org) Falun Gong practitioners held parades in three cities in Malaysia to celebrate the Chinese New Year (February 19, 2015) with local people. Residents in the cities of Triang, Jerantut, and Mentakab in Pahang, Malaysia appreciated the practitioners bringing a jubilant atmosphere, the grace of Falun Gong, and the truth about the brutal persecution of the practice instigated by the Chinese Communist Party. 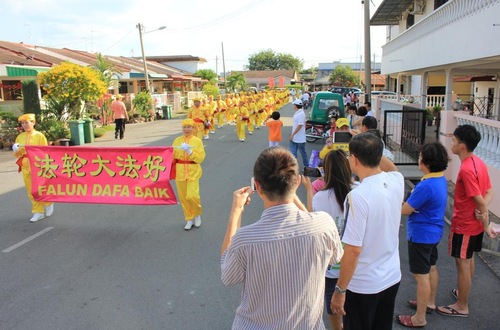 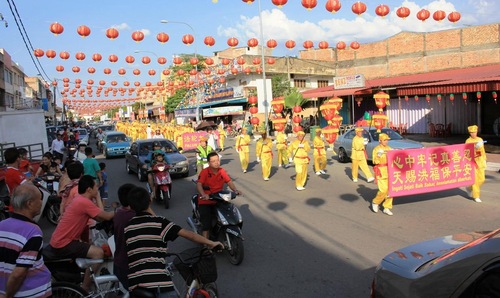 Falun Gong practitioners held a Chinese New Year parade in Triang, the main city in Bera County, with a majority of Chinese residents, on February 28, 2015.

The parade started at 5:00 p.m. with the Divine Land Marching Band leading the procession. Following the band were lantern team, fairy dancing, lion dancing, and a waist drum troupe, presenting a theme of traditional Chinese culture. The practitioners wore colorful traditional Chinese costumes. Their graceful dancing, melodious music, and brilliant colors were eye-catching. Many people were excited and followed the procession. Some residents celebrated the event with fireworks.

Mr. Tan Songhui, 73, is a retired teacher. He was happy, and praised the parade, “Very good. So splendid! This is my first time seeing it! It is great to pass down traditional Chinese culture for our children to learn. This parade is the best!”

Seeing some elder waist drum players in the procession, Mr. Tan was touched, “I felt they are special, and worked hard to promote traditional Chinese culture. This parade is the best! Thank you!”

Mr. Feng You is a branch manager of an insurance company. He said, “The parade is well organized, splendid, and meaningful. This is my first time seeing such a parade and lion dancing. I had watched lion dancing on TV, before but never see it live.”

“Some customers mentioned Falun Gong to me before, but I paid little attention. Today, I bought a Falun Gong book Zhuan Falun to read.” 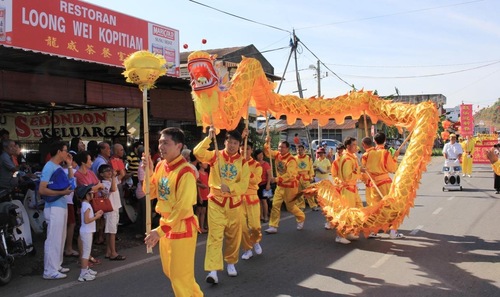 Falun Gong practitioners held a Chinese New Year parade in Jerantut, Pahang on the morning of March 1, 2015. Ms. Lu, who grew up in Jerantut, said happily after watching the parade, “I am fortunate to see this parade. This is a blessing. I have a feeling that the parade will bring prosperity and good fortune.”

Mohamad Rafie is a doctor at a Putrajaya hospital. He and his family had a vacation in Jerantut that day, and came across the practitioners' parade. They were excited and had photos taken with the procession. Doctor Rafie said, “I think this performance is amazing, and has caught the attention of many people.” 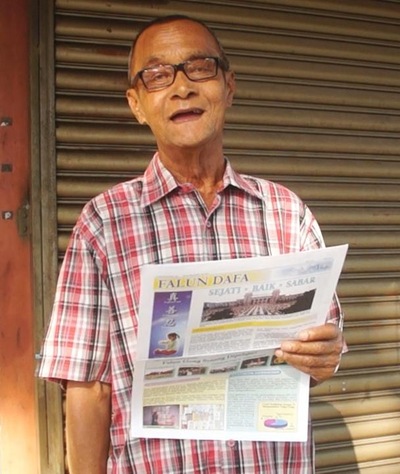 Mr. AzharJaafar, 60, chair of Vehicle Rental Cooperatives in Jerantut, watched the parade at the starting point. He said happily, “I am very pleased to see the parade. The atmosphere is rejoicing. Such culture should be promoted in Malaysia. This is a very good group. There are no such groups in Malaysia. Falun Dafa brings good fortune to the all human beings, including Malaysian, Chinese, and Indians. I appreciate Falun Dafa. Thank you very much.”

Resident in Mentakab: You Are Successful Because of Good Cooperation 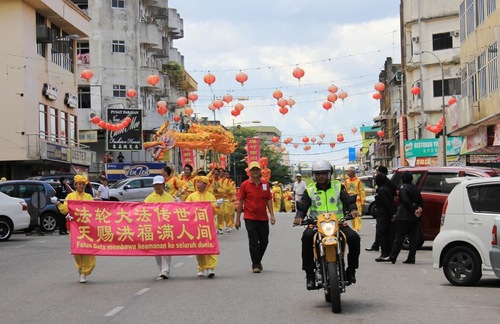 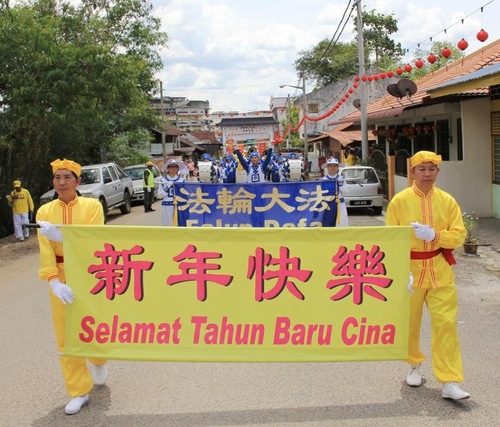 Falun Gong practitioners went to another city, Mentakab on the afternoon of March 1, 2015, and held a New Year parade there. Resident Ms. Chen Yamei, 62, said, “You cooperate very well. You come out to safeguard Falun Gong under the scorching sunshine. It is very good. You are successful because of your one mind and cooperation.

“In China, the Communist Party persecutes Falun Gong very much. But there is no such interference in Taiwan. I went to both countries and saw Falun Gong practitioners.

“This parade is very successful and brings rejoicing to Mentakab. I am happy. You are successful in this culture exchange.”

She said she visited Beijing in 1997, and saw group practice of Falun Gong practitioners. She went to Shanghai in 2014, but did not see any. She said she accepted Falun Gong information materials from practitioners, “Everyone should have freedom of belief.”

The Chinese New Year parades in the three cities by Falun Gong practitioners helped many people understand the grace of Falun Dafa, and become aware of the brutal persecution in China. Some asked for more information, and some said they wished to learn Falun Gong at nearby practice sites.

Local media covered the parade in Triang. The Chinese newspaper China covered the event with an article entitled, “Falun Gong Promotes Truthfulness-Compassion-Forbearance” in its east coast local news on March 2.