(Minghui.org) Today's news from China includes incidents of persecution that took place in 9 cities or counties in 6 provinces. According to this report, 9 Falun Gong practitioners were subjected to mistreatment during their detention, and at least 5 practitioners were illegally arrested. 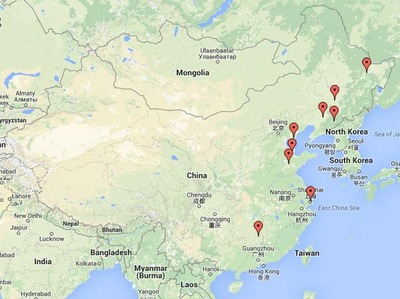 Ms. Cui was sentenced to two years of forced labor around 2001 in Shanghai. She was held in Shanghai Women's Forced Labor Camp, where she was abused and tortured. She was handcuffed behind her back and hung on a door frame for several days. The guards deprived her of sleep around the clock, and forced her to watch videos that slandered Falun Gong.

Ms. Peng was released on bail on January 14, 2015 after her family and employer signed the paperwork.

Ms. Liu's hands and feet were cuffed, and she could not move her body. Her hands and feet turned purple because her blood circulation was cut off for an extended period of time.

To resist the illegal detention, Ms. Su went on hunger strike for about a week. When Zhao Yujia found out about it, she ordered four inmates to carry Ms. Su downstairs where she was force-fed three times.

Ms. Bao Lixia from Jiamusi City was arrested while she distributed Falun Gong materials on the afternoon of January 24, 2015, by officers from the Changsheng Police Station, affiliated with the Dongfeng Police Department in Jiamusi City. Later she was transferred to the Jianguo Road Police Station. That evening she was taken to the Jiamusi Detention Center.

Ms. Liu Junying and another female practitioner also with the last name Liu were arrested by plainclothes police officers from the Haibin Police Department, Gudao Town, Dongying City for telling people about Falun Gong on the morning of January 23, 2015. Both practitioners are nearly 70 years old, and from Xianhe Town. The police ransacked their homes. Both practitioners were held at the Hekou Detention Center, Dongying City for 15 days of detention.

Mr. Yan Jingyou from Changchun City has been illegally held in custody for over a year. On the morning of December 12, 2014, he was tried by the Kuancheng District Court. The detention center authorities notified his family that Mr. Yan developed high blood pressure, with readings over 200, along with heart problems. Mr. Yan was taken to the Xinkang Hospital. The authorities notified the family to take Mr. Yan home on “medical parole.”

Mr. Yan's wife is now suffering from liver and gall bladder illnesses. She has been hospitalized.

Ms. Liu Hongying and Ms. Cui Guang'e from Leting County went to a farmer's market in Songdaokou Town, Luannan County on December 27, 2014 to distribute Falun Gong informational calendars. They were arrested and taken to the Luannan County Detention Center. Ms. Cui returned home two weeks later, but Ms. Liu Hongying was transferred to the Tangshan No. 1 Detention Center on January 8, 2015.