(Minghui.org) Anastasia Lin, a 25-year-old Canadian actress who holds the title of Miss World Canada of 2015, has caught attention of the world's media last week after being denied an invitation letter, and then a visa, to enter China for the final round of the pageant, which is being held in Sanya.

Lin has been labeled by the Chinese government as “persona non grata,” or unwelcome, after she criticized the communist regime's violent persecution of Falun Gong and harvesting of organs from living Falun Gong practitioners imprisoned in China for their beliefs. 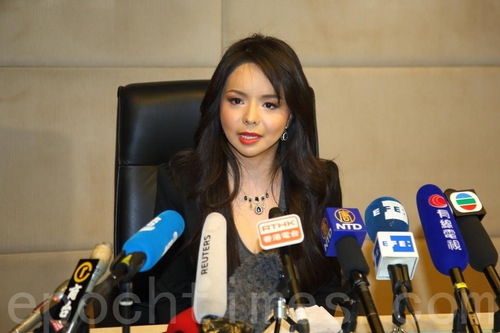 CBC News reported on November 26 that Anastasia Lin “said she was unable to board her connecting flight from Hong Kong after a Chinese official told her by telephone that she would not be granted a visa on arrival.”

“Lin said that after she won the Canadian title, Chinese security agents visited her father who still lives in China in an apparent attempt to intimidate her into silence. Although she hadn't received an invitation letter from organizers, and therefore was unable to obtain a Chinese visa, she said she decided to travel to China anyway in hopes of obtaining a visa on arrival.”

A report by the Associated Press pointed out, “Lin, an actress and resident of Toronto, is an outspoken critic of Chinese religious policy and a follower of the Falun Gong meditation practice, which was outlawed by China's ruling Communist Party in 1999.”

“'The Chinese government has barred me from the competition for political reasons. They are trying to punish me for my beliefs and prevent me from speaking out about human rights issues,' Lin said in her prepared statement.”

AFP: Lin Speaks for Those in China That Are Beaten, Burned and Electrocuted

The following are from an AFP report, “Miss Canada lashes out at Beijing after contest snub.”

“'I believe the Chinese government is angry at me because my work brings attention to these (human rights) issues,' Lin said at a press conference on Friday morning.”

“Herself a practitioner of Falun Gong -- which emerged in the 1990s combining Taoist philosophy, meditation and qigong exercises – Lin testified in July at a US congressional hearing on religious persecution in China. Lin told US lawmakers she 'wanted to speak for those in China that are beaten, burned and electrocuted for holding to their beliefs -- people in prison who eat rotten food with blistered fingers because they dare have convictions.'”

New York Times: “Bigger Platform to Speak out about the Imprisonment and Torture Falun Gong Adherents Face in China”

“Her David-and-Goliath clash with the Chinese government has drawn sympathetic media attention and legions of supporters around the world, providing her an even bigger platform to speak out about the imprisonment and torture Falun Gong adherents face in China.”

An article on Quartz, an American magazine, was titled “China barred a human rights activist from a global beauty contest—putting her squarely in the spotlight.”

It states, “But if silencing Lin’s criticisms was the plan, it has backfired dramatically. In the roughly 24 hours since Lin was refused entry, media outlets the world over have sought out Lin to discuss her viewpoints on China’s abuse of its citizens’ freedoms and rights. Her name is suddenly the subject of Google searches.”

Le Temps, a Swiss media outlet, reported the reason Miss Canada couldn't enter the Miss World contest was because she stood on her principle of “beauty for its mission.”

Ms. Lin was deprived of her right to enter China because she had exposed the persecution of Falun Gong practitioners in China. She told the reporter that it wasn't her goal to cry out slogans during the contest, but her appearance would bring hope to the persecution victims.

The Chosun Ilbo in South Korea introduced the Falun Gong exercises, its main book Zhuan Falun, and its health benefits, citing a 1998 government survey showing that 99.1% of the 12,731 respondents reported improved health after practicing Falun Gong. The Chinese government has issued several awards to Master Li Hongzhi, the founder of Falun Gong, for his contribution to the well being of the people.

The report added that Falun Gong practitioners strive to improve their character through Truthfulness, Compassion and Forbearance, and that these qualities serve as a great model for mankind's value system.