Malaysia: Speaking Out About the Persecution in China on World Human Rights Day

(Minghui.org) Falun Gong practitioners held a rally near the Chinese Embassy in Malaysia on December 10, 2015, World Human Rights Day. They condemned the Chinese Communist Party (CCP)'s 16-year-long brutal persecution of Falun Gong and expressed support for the hundreds of thousands of Chinese citizens who have filed criminal complaints against Jiang Zemin, former head of the CCP.

An official letter of protest was handed in to Chinese Embassy officials. 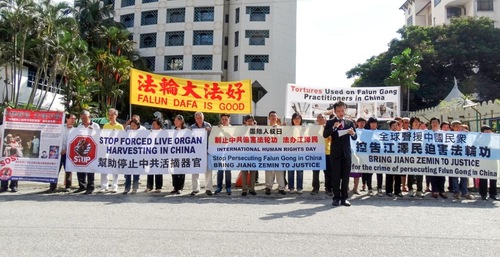 Falun Gong practitioners rally near the Chinese Embassy in Malaysia on December 10, 2015.

Spokesperson Mr. Zhu described how the brutal persecution conforms with genocide in Article VI and crimes against humanity of Article VII in the "Rome Statute of the International Criminal Court," issued by the United Nations in 1998. The dictators who commit the crimes can be sued in any country. The main perpetrators Jiang Zemin, Luo Gan, Zhou Yongkang, and Zeng Qinghong have been sued in over 30 countries for their crimes against humanity, torture and genocide.

Wave of Lawsuits Against Jiang in China

Over one million others around the world have signed a petition urging the prosecution of Jiang. Many lawyers and politicians in quite a few countries have called for bringing Jiang to justice.

Spokesperson Mr. Cai read the same announcement in Chinese. “The brutal persecution brings immense suffering to Falun Gong practitioners and their families. Live organ harvesting is an unprecedented crime on this planet. The persecution of good people has led to judicial and moral degradation in China. All Chinese become victims in the persecution.”

He called on people in all walks of life to stand up for justice and conscience to help stop the persecution.