(Minghui.org) The City Council of Chicago, Illinois passed Resolution R2014-627 on July 30, 2014 stating “that any harsh brutal and repressive practices of the Chinese Government against Falun Gong followers be condemned.” It also requests “that the federal government do everything in its power to help stop the atrocities in China; and the immediate release of all Falun Gong practitioners and other prisoners of conscience.”

The resolution was put forward by James Cappleman, Chicago's 46th Ward Alderman and was passed unanimously in the council meeting. 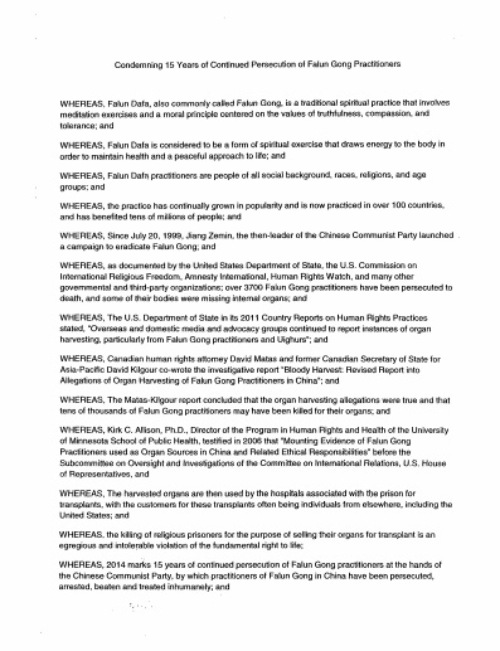 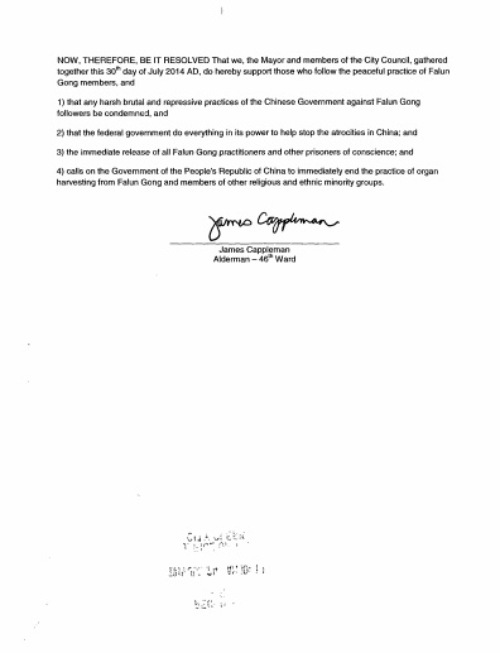 The following is the full text of the resolution:

“WHEREAS, Falun Dafa, also commonly called Falun Gong, is a traditional spiritual practice that involves meditation exercises and a moral principle centered on the values of truthfulness, compassion, and tolerance; and

WHEREAS, Falun Dafa is considered to be a form of spiritual exercise that draws energy to the body in order to maintain health and a peaceful approach to life; and

WHEREAS, Falun Data, practitioners are people of all social background, races, religions, and age groups; andWHEREAS, the practice has continually grown in popularity and is now practiced in over 100 countries, and has benefited tens of millions of people; and

WHEREAS, Since July 20, 1999, Jiang Zemin, the then-leader of the Chinese Communist Party launched a campaign to eradicate Falun Gong; and

WHEREAS, as documented by the United States Department of State, the U.S. Commission on International Religious Freedom, Amnesty International, Human Rights Watch, and many other governmental and third-party organizations; over 3700 Falun Gong practitioners have been persecuted to death, and some of their bodies were missing internal organs; and

WHEREAS, The U.S. Department of State in its 2011 Country Reports on Human Rights Practices stated, "Overseas and domestic media and advocacy groups continued to report instances of organ harvesting, particularly from Falun Gong practitioners and Uighurs"; and

WHEREAS,The Matas-Kilgour report concluded that the organ harvesting allegations were true and that tens of thousands of Falun Gong practitioners may have been killed for their organs; and

WHEREAS, Kirk C. Allison, Ph.D., Director of the Program in Human Rights and Health of the University of Minnesota School of Public Health, testified in 2006 that "Mounting Evidence of Falun Gong Practitioners used as Organ Sources in China and Related Ethical Responsibilities" before the Subcommittee on Oversight and Investigations of the Committee on International Relations, U.S. House of Representatives; and

WHEREAS, The harvested organs are then used by the hospitals associated with the prison for transplants, with the customers for these transplants often being individuals from elsewhere, including the United States; and

WHEREAS, the killing of religious prisoners for the purpose of selling their organs for transplant is an egregious and intolerable violation of the fundamental right to life;

NOW, THEREFORE, BE IT RESOLVED That we, the Mayor and members of the City Council, gathered together this 30th day of July 2014 AD, do hereby support those who follow the peaceful practice of Falun Gong members, andJames Cappleman Alderman - 46th Ward

1. that any harsh brutal and repressive practices of the Chinese Government against Falun Gong followers be condemned, and2. that the federal government do everything in its power to help stop the atrocities in China; and3. the immediate release of all Falun Gong practitioners and other prisoners of conscience; and4. calls on the Government of the People's Republic of China to immediately end the practice of organ harvesting from Falun Gong and members of other religious and ethnic minority groups.”