(Minghui.org) About 400-500 tourists from mainland China usually visit the Cihu Mausoleum every day, as either the first or the last stop of their tours. Five Falun Gong practitioners started holding truth-clarification activities at this popular tourist attraction in November 2013. Within a few months, close to 70 Falun Gong practitioners joined the team to take this great opportunity to tell Chinese tourists the facts about Falun Gong and the persecution.

Cihu literally means "benevolent lake." Chiang Kai-shek gave it the name in 1962 because the scenery reminded him of his benevolent mother and his hometown. 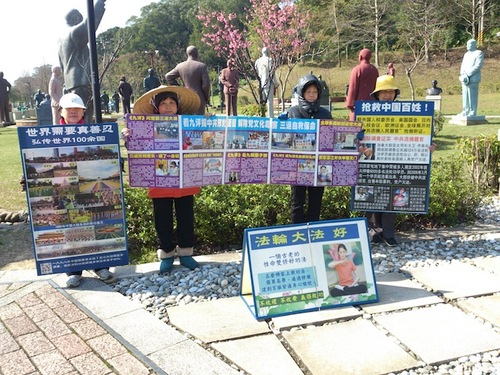 Ms. Huang Ruier is an elementary school teacher. She was one of the first practitioners who initiated truth-clarification activities at Cihu. Ms. Huang has explained the facts about the persecution of Falun Gong to numerous tourists from China and helped them to renounce the Communist Party.

Seeing the exercise demonstration by the practitioners from Taiwan, some tourists from mainland China were surprised to learn that Falun Gong is popular worldwide and practiced freely outside China. This is opposite to what the CCP's propaganda claims. One of the tourists who saw the group doing the exercises shouted, “Falun Dafa is great!”

Falun Gong practitioner Mr. Huang Maozhi is a retired educator who regularly helps raise awareness at Cihui. One time, he saw a Chinese tourist who was moved to tears upon reading a display board about the brutal persecution of Falun Gong. The man said with emotion, “Down the Communist Party!” Mr. Huang talked to him, and he readily agreed to quit the Communist Party organizations.

Falun Gong practitioners make persistent effort to clarify facts of Falun Gong at Cihu. Seventy-five-year-old Fan Damei rides the bus for three hours from her home to Cihu every day. She used to go to another truth-clarification site closer to her home, but after realizing how important the Cihu site is, she didn't hesitate to make that her focus.

Winter at Cihu is cold and wet. The temperature dropped dramatically in November and December last year, when Falun Gong practitioners first began their activities at Cihu. However, Falun Gong practitioners continued to brave the cold to clarify facts to tourists. One day that was particularly chilly, Mr. Huang was able to help 50 Chinese people quit the CCP.