(Minghui.org) Falun Gong practitioners in Malaysia held a rally in front of the Chinese Embassy in Kuala Lumpur, on April 20, 2014 to commemorate the 15 th anniversary of the April 25, 1999 peaceful demonstration in Beijing.

After 15 years of persecution, crimes have been exposed as heinous as harvesting organs from living Falun Gong practitioners. During the rally, practitioners called for people around the world to work together to end the brutal persecution. 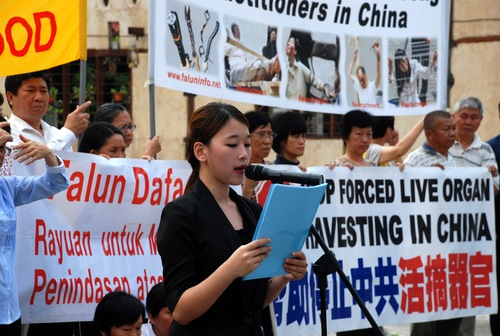 Falun Gong practitioners in Malaysia hold a rally to commemorate the 15 th anniversary of the April 25, 1999 peaceful appeal

A Falun Gong practitioner read a statement in both Chinese and Malaysian to inform the public about the April 25 th peaceful demonstration.

Forced Organ Harvesting Must Be Stopped

During the rally, practitioners highlighted the global signature campaign initiated last year by Doctors Against Forced Organ Harvesting (DAFOH). The petition requests the UN to initiate further investigations into forced organ harvesting from imprisoned Falun Gong practitioners in China and call upon China to immediately end this crime against humanity. A total of 1.5 million signatures were collected from July to November 2013, among which 920,000 signatures were collected in Asian countries.

The petition was eventually hand-delivered to the Office of the UN High Commissioner for Human Rights (OHCHR) prior to International Human Rights Day.

Ms. Cai, spokesperson for the day's activities said, “What is encouraging is that more than 60,000 people of different nationalities in Malaysia joined in this global effort, and showed their support by signing the petition. Among them were 48 doctors, 227 lawyers and 15 members of Parliament. It shows that people from all walks of life in Malaysia oppose the forced organ harvesting.

“We hope that our government and the international community will make efforts to help end this crime, and that the UN will take seriously the voices of 1.5 million people in the world,” she concluded.

Each year on April 25, Malaysia practitioners, along with practitioners around the world, hold activities to commemorate this landmark event.