(Minghui.org) “What happened in Serbia is a signal to the world about the way China tries to extend its oppressive policy in foreign countries. All of us are with various professions and from different social strata. We have one thing in common – we are Falun Dafa practitioners. And only because of that, we were detained in Serbia.”

Sergey Ponomarev, a Russian journalist who lives in Bulgaria, said the above at a press conference in Sofia, Bulgaria, on December 18, 2014.

Mr. Ponomarev was one of the eleven practitioners who visited Belgrade, Serbia to raise awareness about the persecution of Falun Gong (also known as Falun Dafa) in China during Chinese premier Li Keqiang's visit at the CEE-China (Central and Eastern Europe) summit on December 16-17.

All eleven practitioners were detained and removed from Belgrade by December 15. Starting from the night of December 17, they were deported to their home countries in Bulgaria, Slovakia, and Finland.

At the detention center over ten miles away from Belgrade, the eleven practitioners were asked to sign a declaration admitting that they had gone to Serbia to participate in illegal protests—all of them refused.

The practitioners stated that communist China might not be as far away as many people think. The Chinese Communist Party's suppression of universal values affects everyone, and causes damage beyond China's borders. 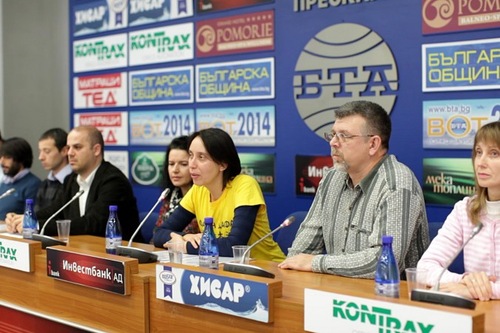 “Stressful” was a common term among the practitioners who recounted their experiences.

According to Dejan Markovic, a contact person for Falun Gong practitioners in Serbia, he applied for an official permit from the local authorities to hold peaceful activities on December 15-18, 2014, but the authorities denied the application without stating legitimate reasons, as required by law.

The moment the nine practitioners, including seven Bulgarian citizens and two Russians living in Bulgaria, arrived at their hostel on the night of December 14, the Serbian police showed up and took away their identification, documents, and cell phones.

By the time they were taken to a detention center for illegal immigrants, all their personal belongings had been taken away, including money, credit cards, and everything else.

The Consul didn't know the accusation, which was communicated to the practitioners as “threat to Serbia's national security and public order,” a crime label similar to what the Chinese Communist Party uses to persecute Falun Gong practitioners in China: “sabotaging law enforcement.”

Support in the European Union

The detention and deportation of the practitioners caught the attention of the EU-Serbia Stabilisation and Association Parliamentary Committee, an EU organization. Eduard Kukan, Member of the European Parliament (MEP), and chair of the Committee, said:

“Considering that Serbia is an EU candidate country, we are alarmed by the steps the Serbian authorities took in this case, and we ask for release of the human rights activists as well as a clear explanation of the situation.”

The spokesperson of the Bulgarian Ministry of Foreign Affairs also stated that the right of freedom of assembly and of free demonstrations is an irreversible right of EU citizens, in response to media questions regarding the detention of Bulgarian practitioners in Serbia.

Amnesty International (AI) and other human rights organizations such as Yukom in Serbia also made statements. AI stated, “Amnesty International is concerned that the Serbian authorities are acting unlawfully, and urges them to immediately end any detention based solely on the persons' intention to exercise their right of peaceful assembly.”

“An Extremely Light Version” of What Happens in China

Bulgarian practitioner Lilia Kostova said at the press conference, “We read a lot about the systematic persecution of Falun Gong practitioners in China. And what happened to us was an extremely light version of what we have read about.”

Martin Angelov, another Bulgarian practitioner, added, “When we held events to inform people about the organ harvesting and to collect signatures against it for the international organization DAFOH (Doctors Against Force Organ Harvesting), people often say, 'Oh, yes, but China is very far away—at the other end of the world. Why should we care?' But now I realized that it is not so far away. In this specific case, I can see repression making its way even to Europe. This, to me, was very shocking.”