(Minghui.org) December 10 marks the 66th International Human Rights Day. As this day approached, Falun Gong practitioners in Malaysia held a rally in front of the Chinese embassy in Kuala Lumpur, condemning the 15-year-long persecution of Falun Gong in China, and calling for help to end the atrocities. 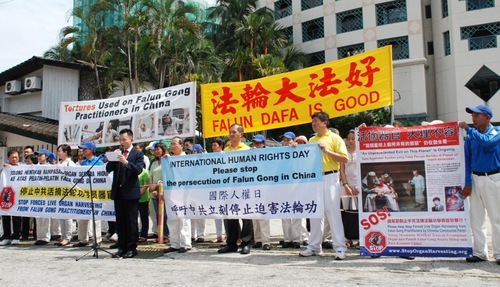 In his speech at the rally, Mr. Cai, spokesman of the Falun Gong group, focused on the state-sanctioned organ harvesting in China. He cited books by David Matas and David Kilgour, two independent Canadian investigators who collected evidence for the existence of organ harvesting.

Mr. Cai also talked about a new documentary on organ harvesting, “Davids and Goliath,” which was recognized as the Best Documentary Feature at this year's Hamilton Film Festival. The festival, held from November 3-9, 2014 in Ontario, Canada attracted 140 movie submissions from around the world.

While talking about Falun Gong and the persecution, Mr. Cai stated that many murderers involved in the persecution have already encountered karmic retribution for their crimes, and the rest will be brought to justice eventually.

At the end of his speech, Mr. Cai said: “International Humans Rights Day is coming. We call upon the international community to stand with us and stop the brutal persecution and the organ harvesting—a new form of evil yet to be seen on this planet.”