November 19, 2014 |   By a Minghui correspondent in Liaoning Province, China

(Minghui.org) Mr. Gao Yumin (高雨民), a police officer from Fuxin City, Liaoning Province, was sentenced to three and a half years in prison for refusing to renounce Falun Dafa.

Mr. Gao has been on a hunger strike for more than 30 days to protest the persecution. He said that he was tortured at Heituozi Detention Center, which included slapping, kicking, force-feeding through the nose and infusion of salt water. 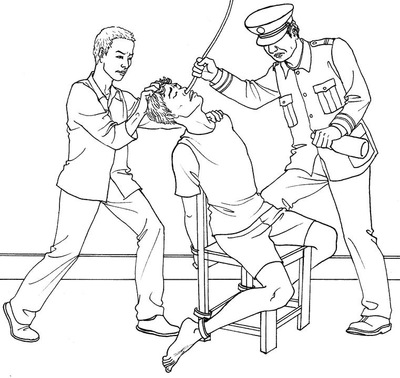 Mr. Gao has become extremely weak because of the persecution. He was transferred to Xinkang Prison Hospital in Shenyang City by the 610 Office and Municipal Political and Legal Affairs Committee.

His family was notified by the Liaoning Prisons Management Hospital that Mr. Gao's life was in danger. The medical report indicates that Mr. Gao failed 15 medical index tests and his kidneys, liver and heart were damaged.

Mr. Gao's shape is abnormal and his vision is blurry. He can no longer distinguish between cold and hot. His head was shaved and there are visible scars on his head from the torture. He often falls into unconsciousness.

Despite his poor health, he is still in handcuffs and shackled. He was transferred to Shenyang No. 1 Prison on November 7, 2014, even though he vomited blood and had blood in his stool.