(Minghui.org) Falun Gong practitioners in Malaysia collected signatures on August 9, 2013, from local people and tourists on Ketam Island, a renowned fishing village, located off the coast of Klang in Selangor.

The event followed a call by Doctors Against Forced Organ Harvesting (DAFOH), to join the global effort collecting signatures on a petition to be submitted to the UN Human Rights High Commissioner calling for an immediate end to forced organ harvesting from living Falun Gong practitioners in China.

The activity drew the attention of many people, and received a great number of positive responses. 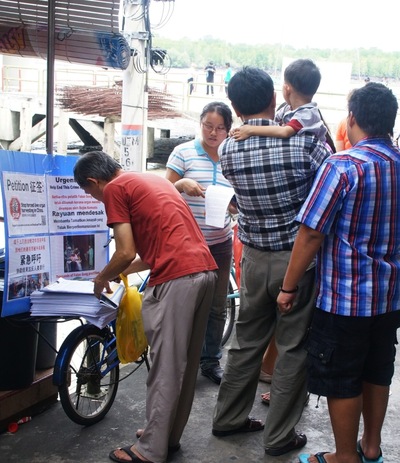 Practitioners' signature drive at the entrance to the village on Katem Island, attracts people's attention 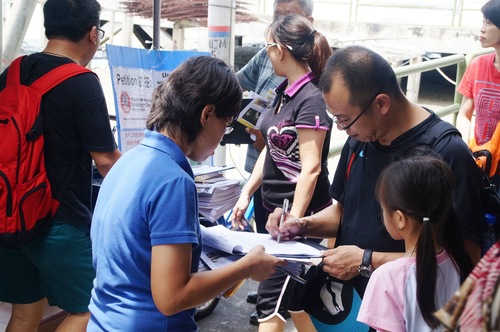 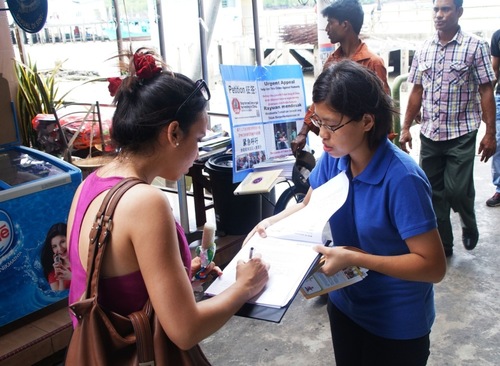 Standing next to a simple signature collection poster, practitioners waited at the entrance to Ketam Island and passed out introductory flyers to a steady stream of people passing by.

Many people stopped to talk to the practitioners, and learned more about the signature drive. After learning that it urgently called for help in stopping the Chinese Communist regime's atrocities of harvesting organs from living Falun Gong practitioners, most people showed great concern and signed the petition.

Besides local people, many tourists from India, Nepal, Bangladesh, Japan, China, and other countries signed the petition and condemned the atrocities.

One middle-aged man said, “The cruelty is beyond the limits that human beings can accept.” The man was shocked, and felt it unbelievable and hard to accept that a country's government could do such cruel things to people.

A nutritionist in her twenties said after signing the petition, “As long as we can help others, we will definitely support this!” Six friends who came with her also signed.

A Christian woman told a practitioner, “I see your efforts. Keep it up. God will bless you.”

An English-educated woman said that her husband had signed the petition. After learning that the signature drive needed everyone's righteous support, she also signed, and encouraged the practitioners to keep up their efforts.

An Indian man from Kuala Lumpur, who works in biotechnology, brought seven of his friends to sign the petition after he learned about the signature drive. They condemned the organ harvesting and agreed that the Chinese Communist Party (CCP) atrocities should be stopped.

After he learned that the organ harvesting in China was under the direct command of the Chinese Communist regime, and that the military and police are involved in it, the Indian man said that the perpetrators would be punished. He encouraged practitioners, saying, “You're doing a good thing. Keep it up!”