(Minghui.org) Falun Gong practitioners held a candlelight vigil in front of the Chinese Consulate in Los Angeles on Thursday evening to commemorate the April 25 appeal in Beijing. That day 14 years ago, more than 10,000 Falun Gong practitioners went to State Petitions Office in Beijing to appeal for the right to practice Falun Gong. It was the largest and most peaceful appeal in history. 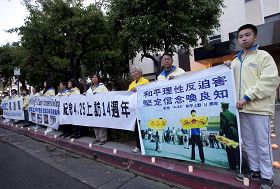 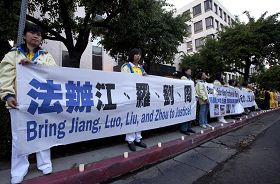 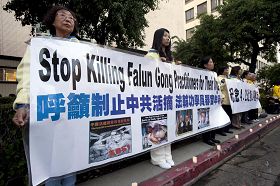 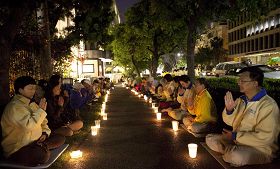 Zheng Qu, the host, said, “We gather here today to commemorate the April 25th appeal. Since Chinese Communist Party began the persecution in 1999, the spirit of April 25 has been present in all our protest activities. Wherever they may be, in the face of this unprecedented evil and the worst rumors trumped up by the communist propaganda machine to incite hatred, Falun Gong practitioners have remained peaceful and rational in their efforts to clarify the truth. They keep steadfast belief in Truth-Compassion-Forbearance.”

Why did the events of April 25 appeal take place? Yong Zhang, former post doctoral student at the Chinese Academy of Science, recounted his personal experience. 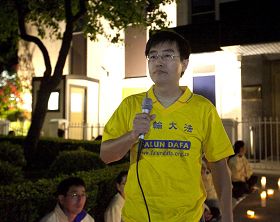 Mr. Zhang said, “The direct reason for the appeal was the arrest of practitioners in Tianjin for explaining the facts at Tianjin College of Education, because a college journal had published an article defaming Falun Gong. Many practitioners went to the government in Tianjin seeking the release of those arrested. But they were told to go to Beijing to get the issue solved.” Mr. Zhang and a few of his colleagues went to the State Petition Office in Beijing by bus.

He continued, “When we arrived, we saw many other practitioners. One practitioner said the police had led them to Fuyou Street near the central government compound. The government later portrayed this in its propaganda as a 'siege' of the central government. I stood on Fuyou Street most of the time that day. I did not know it was a trap prearranged by Luo Gan, at that time a member of the politburo standing committee.

“In the morning, practitioner representatives were asked to go to talk with officials. The practitioners had three requests: release the practitioners arrested in Tianjin, allow us to practice unmolested, and allow the publication of Falun Gong books.

The Chinese Communist Party portrays this appeal as a 'siege of the central government.' Actually, the Party framed Falun Gong and deceived people. No one shouted slogans. All of us waited quietly for the issue to be solved. Many armed police were on site relaxed after seeing us keep order and remain so peaceful. All the traffic lanes were open, and the sidewalks were not blocked. Would a 'siege' have been that peaceful?” 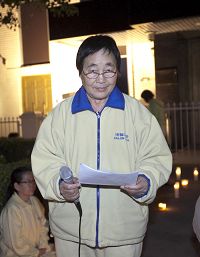 A senior Falun Gong practitioner, Ms. Shuying Li from Beijing, was a physics teacher in high school. She related how she suffered as a result of the persecution over the past 14 years. She said, “I was imprisoned in Beijing Tuanhe Women's Forced Labor Camp. My sister, her daughter, and my elder sister’s daughter were also held in the same camp. My elder sister’s daughter became mentally disordered. My younger sister was forced to take a lot of drugs and lost a lot of weight. My brother was an engineer. He went to State Petitions Office to appeal for Falun Gong. He was persecuted to death in April 2011.”

She continued, “I was lied to, slandered, and tortured mentally. We were also deprived of sleep. Four hours per day was the maximum.”

Yingnian Wu: April 25 appeal is the exercise of constitution rights

Professor Yingnian Wu of the University of California at Los Angeles said, “The April 25 appeal was an exercise of our constitutional rights. The reason for this appeal was because the government was persecuting us. The communist regime started to trump up false charges against Falun Gong and banned the publication of Zhuan Falun in 1997. Tianjin police beat and arrested Falun Gong practitioners and refused to release them before April 25. Saying that the April 25th appeal led to the persecution is a complete reversal of the causal relationship. It is the nature of the Party to lie, use violence, and struggle, and former head Jiang Zemin was jealous of the practice. The large scale persecution would have occurred without the April 25 appeal.

“The brutal persecution has lasted for 14 years, and at least 3,643 practitioners have died. The actual number of deaths could be much higher as the communist regime covers up the facts. Since that day, Falun Gong practitioners have continued to protest the persecution peacefully and rationally. They are seeking to protect the rights of speech and belief not only for themselves but for all Chinese people.”

Yinquan Liu: The persecution of Falun Gong shames the police and judicial system 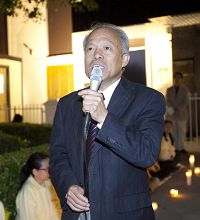 Well-known democracy activist Yinquan Liu said, “The persecution of Falun Gong has brought shame to the police and judicial system.”

Well-known democracy activist Yinquan Liu said, “The Party has persecuted Falun Gong for 14 years, leading to many deaths and tens of thousands of broken families. It is a tragedy for the Chinese people and for the human race in general. At Jiang Zemin’s orders, ‘beating Falun Gong practitioners to death is not a crime,’ and the behavior of the police and judicial system is shameful. For example, in Weifang, Shandong Province, a laborer named Wu Wei had a dispute with a bank director when repairing a water heater. He was beaten but was later framed as the one who had done the beating. A bribed police station director arrested Mr. Wu and forced him to plead guilty. The court, regardless of the facts, ruled he was guilty. This unfair treatment led to his mental collapse.

“There have been too many such incidents. In following the orders of the CCP, the police and judicial system have become corrupt and degenerate. The sole way to solve this issue is the disintegration of the Party.”

Doctor Churchill, who is with Doctors Against Forced Organ Harvesting, said that the Chinese Communist Party started live organ harvesting from Falun Gong practitioners in 2001. The conservative estimate is that 65,000 practitioners have been killed for their organs. More and more medical professionals are paying attention to this issue. His organization is calling on organ transplant departments in US medical schools to require Chinese doctors being trained here to sign a statement that they have not participated in live organ harvesting. Doctors and lawyers are investigating the Chinese doctors to find out whether or not they participated in live organ harvesting.

Mr. Ding, who took a class in a South Korean Chinese Medicine School across from the Chinese Consulate, saw the candlelight vigil and was touched by the peace and serenity. He talked with a school guard about Falun Gong. He said, “It is best to let foreigners know about the live organ harvesting. It is so evil.”

Mr. Ding is from Taiwan and said his mainland Chinese friend was afraid whenever Falun Gong was mentioned. He said, “The CCP brainwashes its citizens. My friend from China does not dare listen to me talk about Falun Gong. She is also afraid of the Party because her family is still in China. Falun Gong practitioners truly demonstrate courageous spirit.”