(Minghui.org) Today's News from China includes incidents of persecution that took place in 3 cities or counties in 2 provinces. According to this report, 4 practitioners were subjected to mistreatment during their detention, and at least 2 practitioners were illegally arrested. 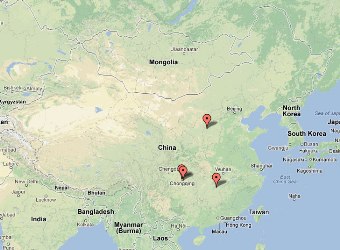 Falun Gong practitioner Ms. Liao Wentao was illegally sentenced to seven years of imprisonment in 2000 and was detained at Chongqing Women's Prison.

Ms. Liao was arrested in Chongqing again in June 2009 and was held at Dianjiang Detention Center. She was sentenced to five years of imprisonment in early November 2009, and was sent to Chongqing Women's Prison on February 5, 2010. Because she refused to be “reformed,” she was placed in a solitary confinement cell. During the day, she was handcuffed to a window. At night, she was handcuffed to a bed.

In May 2012, perpetrators from Prison Ward No. 2 at Chongqing Women's Prison transferred Ms. Liao. No one knows her current whereabouts.

Mr. Gong Houdi from Beibei District had his house ransacked, and his computer, printer and Falun Gong books were taken away on April 16, 2012. He was arrested the next day and taken to Beibei Detention Center. Mr. Gong was later sentenced to three years and six months of imprisonment and is being held in Ward No. 12 at Yongchuan Prison.

Ms. Liu Qingxiu was arrested on September 5, 2011. She was put on trial on November 29, 2012 and sentenced to ten years of imprisonment. She was sent to Changsha Women's Prison on February 1, 2013.