(Minghui.org) In late January 2013, the House of Representatives and Senate of the State of Maine adopted the following joint resolution which declared their support for the Falun Dafa movement and its followers by proclaiming February 2013 as Falun Dafa Month. The resolution also condemned the Chinese Communist regime’s atrocity of forced organ harvesting from Falun Dafa practitioners of conscience that results in their deaths.

In the Year of Our Lord Twenty Thirteen

WHEREAS, Falun Dafa, also known as Falun Gong, is a Chinese practice of gentle exercise and meditation based on the universal principles of truthfulness, compassion and forbearance; and

WHEREAS, this practice, which transcends all cultural, social, economic and national boundaries, has helped millions of practitioners in over 70 countries create and improve personal well-being and become more productive members of society; and

WHEREAS, in 1999 the government of the People's Republic of China outlawed the practice of Falun Dafa in that nation and created a campaign of persecution and terror against its peaceful adherents; and

WHEREAS, the Chinese regime commits forced organ harvesting on Falun Dafa prisoners of conscience that results in their deaths; and

WHEREAS, this persecution campaign against practitioners of Falun Dafa denies the basic human rights of freedom of belief, assembly and expression; now, therefore, be it

RESOLVED: That We, the Members of the One Hundred and Twenty-sixth Legislature of the State of Maine now assembled in the First Regular Session, on behalf of the people we represent, declare our support for the Falun Dafa movement and its followers by proclaiming February 2013 as Falun Dafa Month; and be it further

In Senate Chamber
Read and Adopted January 31, 2013
In Concurrence

Mark W. Eves
Speaker of the House of Representatives

In Testimony Whereof, I have caused the seal of the State to be hereunto affixed, GIVEN under my hand at Augusta, this thirty-first day of January in the year twenty thirteen. 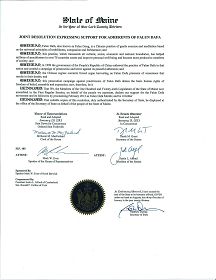