Sisters Sentenced and Held in Detention

October 13, 2013 |   By a Minghui correspondent from Shandong Province, China

Ms. Zhang Shuwen, the younger sister, was illegally sentenced to seven years on May 9, 2013, and detained in Shandong No.1 Women's Prison. Ms. Zhang Shuxin has been detained in Pudong Detention Center and has not been allowed to see her family. 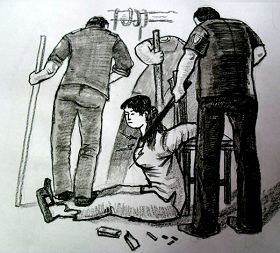 Ms. Zhang Shuxin had poor health, but after she started practicing Falun Gong, her body and mind improved greatly.

Ms. Zhang Shuwen lived with her son. She also became healthy and upgraded her moral standards after practicing Falun Gong. However, she is now in detention, and her son, a college student, has lost his financial support.

After March 2, 2012, nine Falun Gong practitioners were arrested in Jiaonan. The morning of March 20, Ms. Zhang Shuxin's son opened the door to their home, thinking it was the mailman. Zhangjialou police officers entered and arrested Ms. Zhang Shuxin and her son, as well as her sister, Ms. Zhang Shuwen, who was there visiting. The three were detained at the Zhangjialou Police Station.

In the station, the sisters were tortured and asked where they got their truth-clarifying materials and for information about other practitioners. One police officer said that Ms. Zhang Shuxin was brutally tortured for five days during her interrogation.

Ms. Zhang Shuwen's husband just passed away, and her son is a sophomore in college. Her former employer closed, and her family lives on her income from housecleaning jobs. To support her son in college, she sold some family belongings for 20,000 yuan and deposited the money to use as tuition for her son.

After Ms. Zhang Shuwen was taken to the Zhangjialou Police station, she gave her bank card to a police officer and told him to give it to her nephew for her son. She also told the officer her password. Director Kou was a witness. Later, Ms. Zhang Shuwen was sentenced to seven years and detained in Zhangqiu Women's Prison on May 9. When her son went to visit her on June 19, she discovered that her son had never received the bankcard.

Later on, her son went to the Zhangjialou Police Station to ask for the bankcard, but was told that there was no such card, and there was no such policeman, either. When Ms. Zhang Shuwen's home was ransacked, their property ownership certificate and residence booklet were both "lost." Her son asked about these documents, but the police flatly denied having them.

The sisters were both held in Dashan Detention Center in Qingdao at the end of March, 2012. Five months later, Ms. Zhang Shuxin, Ms. Zhang Shuwen, along with Chen Yuzhen and Feng Jinhua, were put on trial in the Jiaonan Court at 10 a.m. August 23. Since Dashan Detention Center moved to Jimo, the four were not taken back to Jiaonan until midnight. They were handcuffed and shacked before being brought into the courtroom, and were clearly in pain, which moved their family members to tears.

In the courtroom, the public prosecutor quickly stated his case and Judge Liu Jinren concluded the trial within an hour. It was yet another example of the Chinese Communist Party's disregard for the law.

Son Not Allowed to Visit

Ms. Zhang Shuxin was arrested in March, 2012, and has been detained in Pudong Detention Center for over a year. Her son went to the detention center to visit her many times, but was turned away without a reason. Ms. Zhang Shuxin's son has lived with his mother for over 20 years. He is very anxious about her.

Principals responsible for the persecution: