(Minghui.org) The Oregonian recently reported on a secret letter pleading for help, written by an inmate at the infamous Masanjia Forced Labor Camp in China. The letter was hidden in a pack of Halloween decorations purchased by someone in the United States. The news has stirred up public attention to the travesty of forced labor under dictatorships. In China, slave labor has been implemented throughout the entire penal system, including detention centers, forced labor camps, and prisons. This article explores the situation of forced labor in Shanghai, part of the systematic abuse of human rights in today's China.

According to China's laws, individuals detained at detention centers are either suspects, or else are people who have been charged with only minor crimes. As they have not been convicted, legally they should not be subjected to “reformation through forced labor.” However, detainees in detention centers have been forced to carry out heavy workloads. There is even a saying, “working to death at Hongkou,” which refers to the intense forced labor in the Hongkou Detention Center in Shanghai. 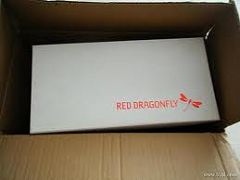 The Baoshan Detention Center in Shanghai, known as the “No. 1 detention center in the Far-east,” is an institution where forced labor is imposed. Its production include boxes for contact lenses, packages for moon-cakes, manuals used in some Japanese theme parks, shoe boxes for Red Dragonfly, and shopping bags for the Jiuguang Department Store. All of these products have been made by detainees in cramped, locked cells. The cells are filled with strong fumes from the glue used in the production. Detainees are forced to work in this environment, full of toxic air and dust, for more than 12 hours per day. They have to eat their meals and use the toilet in the same room.

Why are detainees who are not convicted criminals subjected to forced labor, in violation of China's laws? In China, detention centers are run by police stations, and therefore related budget and resources are controlled by local police stations. Through the use of illegal forced labor, which does not require any investment, police stations are able to generate significant profits. Detainees are deprived of all freedom and rights, including the right to be paid for their labor. Often, they are physically abused by police officers at will, sometimes even killed.

Forced labor camps have been used to “re-educate” people through “labor.” Because the regulations deem forced labor unlawful, the action of using forced labor for profit is inhumane. 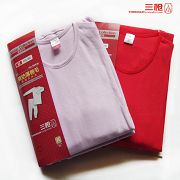 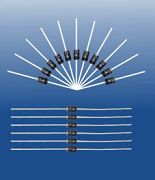 For example, the Shanghai Women's Forced Labor Camp manufactures Three-gun underwear (see photo), stuffed animals, diodes, bead strings, small bulbs, and other items. Piles of materials and boxes of products are everywhere in the camp. Inmates working on sewing machines are forced to work for several days and nights continuously to try to finish their heavy workloads. Detainees often injure their fingers with the needles because they are overworked and exhausted. However, they have to continue working after a simple wrapping of the wound. Another product, diodes, requires workers to straighten wires to be completely straight on a palm-sized rubber pad. Each inmate has to finish seven kilograms of diodes each day. Falun Gong practitioners held at the Shanghai Women's Forced Labor Camp have been the primary workers producing diodes. Many of them suffer from tenosynovitis, swollen fingers, and broken skin. If they cannot finish their workloads in their rooms on time, they have to continue working in the washroom until 2:00 or 3:00 a.m. After only several hours of sleep, they are awakened to continue working.

The labor of inmates has brought tremendous profit to the forced labor system, police officers and wardens. In 2003, the Shanghai Women's Forced Labor Camp built a sixth building, in addition to its existing buildings, for housing inmates. This made it possible to imprison more slave labor to augment their “education-through-forced-labor” industry.

Prisons comprise even larger sweat shops in China, and many of them have formal names reflecting this function. For example, the Deyang Prison in Sichuan is called Deyang City 95th Factory of Sichuan Province, the Shanxi Women's Prison is called Shanxi Province Chemical Factory, and the Baoding Prison (No. 1 Prison of Hebei Province), is called Hebei Lathe Factory. 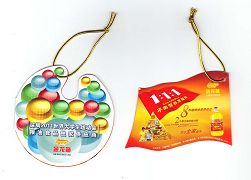 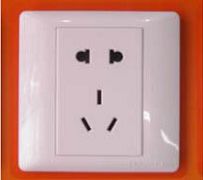 Shanghai Women's Prison has manufactured garments, sweaters, packages for Gillette, packages for Shanghai Jiahua cosmetics, tags for Goldfish Oil, folded coupons for KFC, and Eagle outlet face-plates (see photos above). Dozens of Falun Gong practitioners were imprisoned in Division Five of Shanghai Women's Prison, and were forced to make knots for Goldfish Oil tags, as many as 5,400 knots per day. Making so many knots can cause the fingers to bleed, and inmates had to work under dim lights at night for extended periods of time. Many elderly Falun Gong practitioners developed high blood pressure due to the hard work. Division Five opened a new workshop for producing Eagle outlet face-plates in 2011. Due to the difficult repetitive work, many inmates suffered from deteriorated eyesight and overall poor health.

Forced labor is the economic backbone of the prison system in China. In order to legitimize their program, prisons and forced labor camps have created the slogan “work cleanses sin.” To maximize production, inmates and detainees are forced to eat, sleep, work, and use the toilet within one single room which is often filled with toxic fumes and dust. They must finish eating quickly to avoid being called “lazy” and penalized.

We request conscientious people to boycott products made by forced labor products.