(Minghui.org) Falun Gong practitioners held activities at Neupfarrplatz in downtown Regensburg, Germany on Saturday, July 28, 2012. They set up an information booth to introduce the benefits of Falun Dafa and expose the brutal persecution in China. Regensburg is a beautiful city with an ancient history and civilization. Many tourists were attracted to the soothing Falun Gong exercise music in busy downtown, and learned the facts about Falun Gong. 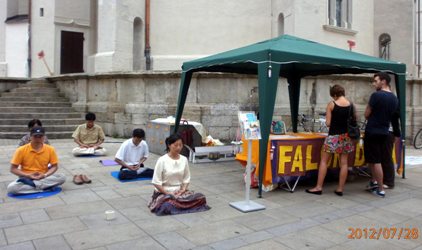 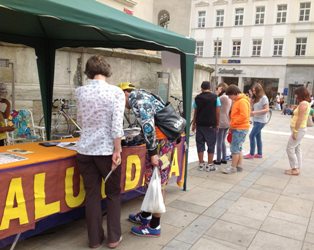 Many people signed a petition to condemn the Chinese Communist Party for harvesting organs from living Falun Gong practitioners. A man who wrote down his name on the signature collection form thanked the practitioners for sharing the information and calling for justice. He believes the world will wake up to the truth someday.

Two gentlemen from Malaysia had a lively conversation with the practitioners. They came to Germany for training and were going to leave in a few hours. They felt very fortunate to have run into Falun Gong. After learning the facts about the persecution, they signed the petition to condemn the persecution and took many printed materials to read, including the Nine Commentaries on the Communist Party.

A German lady watched the Falun Gong exercise demonstration for a long time. She told the practitioners she was very interested in cultivation. She had visited China 20 years ago and realized China was losing its truly valuable culture. She was thrilled to find out she could learn Falun Gong exercises for free in Regensburg. She said she would certainly join the exercise group.

When a Chinese tour group passed the Falun Dafa information booth, a practitioner told the group leader to learn the true story about Falun Gong and quit the CCP. The group leader accepted some introductory materials. The members of his group did also. The practitioner answered their questions about Qigong exercises and organ harvesting. A female student decided to quit the Communist Youth League and Young Pioneers right away.