(Minghui.org) When Jilin City practitioner Ms. Guo Yingjie was taking care of her 90-year-old parents in their home, the police came and arrested her on July 31, 2012. They then went to Ms. Guo’s home, ransacked it, and waited there for other practitioners.

That evening, the police arrested Cao Yang (Ms. Guo’s relative) and Zhu Baiqiao (a non-practitioner son of practitioner Ms. Han Fenghua). Afterwards they also arrested Ms. Han. Ms. Guo is currently being held at the Jilin City Detention Center, and the whereabouts of the three others are unknown. 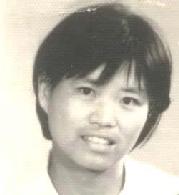 A photo of Ms. Guo Yingjie when she was young

Ms. Guo, 54 years old, often went to her parents’ place at Koutang Town of Yongji County and took care of them. The Jilin City police came at 5 p.m. on July 31 and arrested her. They searched her parent's house as well as Ms. Guo’s home.

Ms. Guo Yingjie is currently being held at the Jilin City Detention Center, but the whereabouts of Ms. Han Fenghua, Cao Yang, and Zhu Bailin remain unknown. Their families are very worried.

It was said that the arrests were ordered by Zhang Xiaopei, CCP head of Jilin City. He said Falun Gong practitioners had sent text messages to his cell phone and he wanted to identify who had done it.

Ms. Guo Tortured at the Heizuizi Women’s Prison in Changchun

Ms. Guo Yinjie started to practice Falun Dafa in February 1999. Ever since then, she has been following the principles of Truthfulness, Compassion, and Forbearance in her daily life and has benefited both physically and mentally from her practice. She is a respected figure in her community.

Ms. Guo works in a bank. After she went to Beijing to appeal in September 1999, she was dismissed from her work unit for nearly two years. With no other source of income and with her husband unemployed as well, Ms. Guo tried very hard to find a job to support her family, but she couldn't find one. The police had already completely drained the family's savings through extortion. Over the years, the police extorted more than 10,000 yuan from her.

More than 10 agents from the Jilin State Security Bureau and Jilin police went to Ms. Guo’s home in late 2004. They arrested her and took away a computer, a printer, and Falun Gong books. When they sent her to Jilin City First Detention Center she went on a hunger strike to request an unconditional release. Several months later, Ms. Guo was sentenced to six years of imprisonment and was sent to the Heizuizi Prison in Changchun.

Ms. Guo was tortured with the method known as Tying the Ropes. Inmates tied her four limbs up and hung her above a bed. Four inmates then pulled the ropes up to stretch her up into the air and did not release her even when she needed to use the toilet. As a result, her hands and feet were swollen and bleeding. Nonetheless, she never gave up her belief in Falun Gong and because she remained steadfast, the police would not allow her family to visit. Her ill husband was left alone at home. He suffered from many illnesses, and had to give himself IV injections every day.

Related article: “Even Though Practitioner Ms. Guo Yinjie Is Refused Admission to a Prison Because the Persecution Ruined Her Health, She Is Kept in Detention (Photo)” http://en.minghui.org/emh/articles/2005/8/2/63517.html#.UCJIdaPuhac

Ms. Han Fenghua, 57 years old, is a former middle school teacher in Gangyao Town. She went to Beijing several times to appeal and was detained twice at brainwashing centers. She kept practicing Falun Gong and used every opportunity to clarify the truth to people.

At 6:30 on September 25, 2001, Gangyao Police Station officer Wang Liansheng and six other CCP officials went to Ms. Han’s home, attempting to arrest her and send her to a brainwashing center. Ms. Han refused and fainted, falling to the floor. After she regained consciousness, the officials carried her outside and forcibly pushed her into the police van. Wang grabbed her and beat her. As a result, large areas of Ms. Han's body were covered with bruises.

When Ms. Han taught at an engineering school in Jilin City in 2005, because she told the facts about Falun Gong to her students, the school principal fired her and would not pay her salary.

In June 2005, Ms. Han went to the school to ask for her salary and to clarify the truth. The principal reported her to police. She was arrested and detained in Jilin City’s Third Detention Center.

In early July 2005, Ms. Han was sent to a forced labor camp for a one-year term. When she negated the persecution with righteous thoughts, the labor camp officials refused to accept her and Ms. Han was released.