(Minghui.org) As Falun Gong practitioners held display boards in San Francisco's Chinatown to raise awareness about the Chinese Communist Party's (CCP) ongoing persecution of Falun Gong, over a dozen people came over to verbally abuse and physically assault the practitioners. The incident took place around noon on June 10, 2012, at the junction of Grant Avenue and Washington Street. The police arrested those participating in the assault. It is suspected that the aggressors were influenced by the CCP, which has repeatedly attempted to intimidate Falun Gong practitioners overseas. 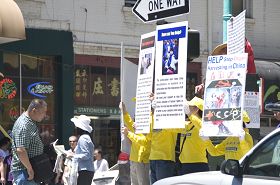 Practitioners hold display boards with informational materials about Falun Gong and the persecution. 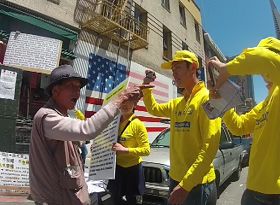 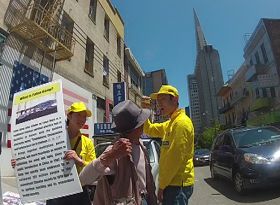 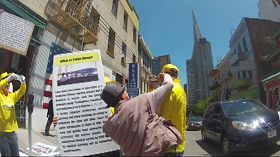 A thug, wearing a gray hat, hits a practitioner in the head. The police subsequently arrested the thug.

One of the police officers confirmed that Falun Gong practitioners have the right to stand in public spaces and raise awareness about the persecution.

The practitioners who were assaulted told the police that they planned to sue the thugs.

Practitioner Mr. Wang said: “We hold these display boards to help the public become aware of the persecution taking place in China. Many families, including ours, have been subjected to the persecution. A thug dressed in red clothing and a gray hat kept slandering us. Some others who were obviously together with him came over to shove us, stir up trouble, and attempt to hit us. Some of us took out cameras to take photos of them, and then the thug began pushing us and hit me twice. An elderly female practitioner was also beaten. The scene was videotaped. The police collected the evidence after they arrived.”

Ms. Luo, who has been living in the U.S. for more than a dozen years, said: “These Falun Gong practitioners told everyone the facts about the persecution of Falun Gong. Their loved ones were persecuted by the CCP for practicing Falun Gong; they face torture every day in China. Shouldn't they appeal for their loved ones in China? They only hope that everybody can awaken to the truth and distinguish between good and evil.”

Ms. Luo added that the CCP has even harvested organs from living Falun Gong practitioners in China. She said: “Why has such a barbaric crime been committed? It is because the moral standard of the Chinese people has declined to such an extent. The root cause is the CCP's atheism that has been instilled into Chinese people's minds over the past 60 years. Life means nothing to them, let alone human rights.”

Ms. Luo thought that the CCP had manipulated the elderly man in red clothing to curse and assault Falun Gong practitioners. She said that the communist regime has been spreading slanderous lies about Falun Gong in Chinatown, confusing the residents and preventing them from learning the true situation.

Practitioner Ms. Huang said that the Chinese Consulate in San Francisco has extended the CCP's persecution of Falun Gong to overseas. It has been implementing the CCP's policy of violence and suppression on U.S. soil.

It is important to expose the Chinese Consulate's acts of interfering with Falun Gong practitioners in the U.S., Ms. Huang said.