(Minghui.org) On the morning of December 16, the 2012 Malaysia Falun Dafa Cultivation Experience Sharing Conference was held in the Syuen Hotel in Ipoh City, Malaysia.

Twenty-one practitioners, ranging in age from 11 to 78, shared their experiences of how they got rid of various attachments, what they did to elevate their xinxing while working on Dafa-related projects, and the changes that they each needed to make to work together to form one body. 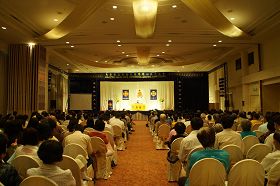 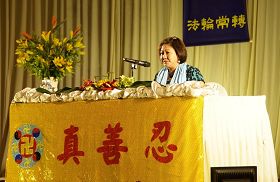 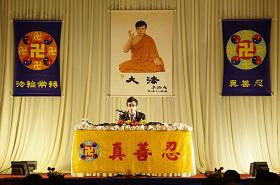 Ms. Chen talked about how making phone calls to China is, in itself, cultivation. The people that she called were directly or indirectly involved in persecuting Falun Dafa practitioners. Every day she read one chapter of Zhuan Falun before making her calls. She stressed the importance of studying the Fa with a focused mind, and how it helped her calm down while talking to people—ensuring a positive outcome.

She shared her experience of making phone calls without any human thoughts mixed in. This often resulted in the receiving party being willing listen to her, and sometimes for a very long time. Teacher's Fa provides every practitioner with the wisdom that he or she needs to validate the Fa.

Explaining the Facts and Helping People Withdraw from the CCP

Ms. Jinlian Yang said that when she initially went with fellow practitioners to clarify the facts at local tourist sites, some tourists cursed at them and some tour guides had bad attitudes. She did not dare to explain the facts about Falun Dafa to these people. After diligently studying the Fa, she overcame her fears and went to the tourist sites no matter what attitude the tourists or tour guides had towards her.

She was finally able to explain the facts to Chinese tourists face-to-face and helped them withdraw from the CCP and its affiliated organizations. She later joined a phone-call group that specialized in helping people in China quit the CCP.

Ms. Yang pointed out that in an easy environment such as this, one could easily become attached to comfort. She understood that this attachment could drag her down, causing her to be out of sync with the Fa-rectification process. She constantly reminded herself to diligently cultivate while saving sentient beings.

Before practicing Dafa, Ms. Guo Xiangyun was diagnosed with liver disease and was told that she only had between three and six months to live. Thinking about her impending death, she pondered, “What is the real meaning of life?” With this thought, she started reading Buddhist scriptures. In 2010, she decided to become a nun. One day, she knelt in the temple with her palms together and made a wish towards the heavens. Approximately two weeks later, she returned to secular life, where she met a Falun Gong practitioner who encouraged her to read Zhuan Falun. She said that this was the book that she had been looking for her whole life.

After practicing Falun Dafa, her physical and mental condition greatly improved. She and her fellow practitioners distributed informational materials door-to-door. Through in-depth Fa-study, she realized the importance of clarifying the truth. She also realized the she needs to cultivate well in order to do the three things well. to fulfill her prehistoric vows, to complete her historic mission, and to not have any regrets in the future. She hoped that practitioners who have yet to step forward will quickly take the first step by working together with other practitioners to clarify the truth and save sentient beings.

Luo Jian-he, an 11-year-old boy from Penang City, has been practicing Falun Dafa for the past six years. His father taught him the exercises when he was just five years old. Now, his whole family cultivates Dafa. He said that when he got older, all of the practitioners met at his home, making it easy for him to participate in group Fa study and send righteous thoughts.

Since he was in a such a convenient cultivation environment, his grades quickly improved. In just three months, he became the number one student in his class. He knew that it was compassionate Teacher and the Fa that helped open up his wisdom. When his classroom teacher asked his mother why all of his grades suddenly improved, his mother replied, "Because he practices Falun Dafa and recently joined a study group that we organized in our home. As a result, his mental aptitude has improved; he has become more motivated, and he is more focused on doing well in school.”

Just two years ago, Jian-he was a very lazy boy, but now he is energetic and focused on doing well in whatever he does. He is not only smart in school, he is also polite and his handwriting is very neat. He also excels in running track, mechanical design, and storytelling. His innate wisdom has blossomed and he is getting excellent results in whatever area of life he applies himself. He hopes that more people will come to know that Falun Dafa and Truthfulness-Compassion-Forbearance are great.

Yan Ji-lun has been practicing Falun Dafa for four years. After reading Zhuan Falun for the first time, he did not immediately start cultivating. Instead, he allowed himself to get caught up in the excitement of college life, including lust, partying at night, and video games, among other things. Thus he stopped practicing Falun Dafa for one year. Deep in heart, he knew that Falun Dafa was what he always wanted. One day, after carefully reviewing his life, he became very sad and started to cry—begging Teacher to help him.

Shortly after, he looked at Teacher's portrait and said aloud, “I want to cultivate and get back to practicing Falun Dafa!” After breaking through many obstacles and tests, he resumed his cultivation practice. After understanding some Fa principles, he realized that the thoughts of human emotion and lust were not emanating from his true self, thus, it was relatively easy for him to get rid of these attachments. He hopes that his experience will help fellow practitioners who have gotten sidetracked to get back on track.

Seventy-year-old Ms. Wang Chunmei started practicing Falun Dafa in 1998. Before that, she suffered from uric acid buildup, a chronically sore foot, and many small problems that caused a lot hardship for both herself and her family. After starting on the path of cultivation, her illnesses disappeared, and her family did not have to look after her anymore. She thanked Teacher and Falun Dafa for her happiness and joy.

In June 2012 she slipped and fell down the stairs from the second floor in her home. Her daughter was very worried about her and took her to the hospital. After she was examined, the doctors said that she was fine. Several days later, her daughter took her back to the hospital for a second opinion. Again, the doctors found nothing wrong with her. When she returned home, she kept up her cultivation practice and recovered without taking any medicine. Her family members witnessed the power of Falun Dafa firsthand.

Looking back over the past 14 years of cultivation practice, she said that, without Teacher’s care, she would not be alive right now. Thus, wherever she goes, she tells people that Falun Dafa is great and that Teacher saved her life.

The conference concluded at 5 p.m.

On December 15, the day before the experience sharing conference, practitioners from across Malaysia got together near Ipoh City Hall to do the exercises. Everyone sat in designated rows to form the two characters, “Fa-rectification,” hoping to bring peace and well wishes to the local people. 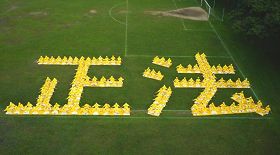 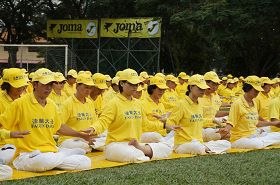 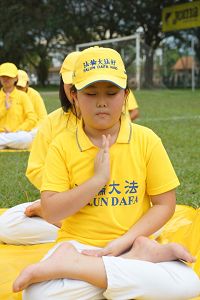 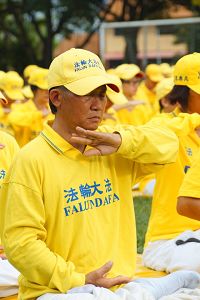 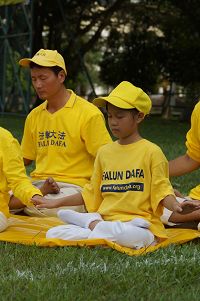 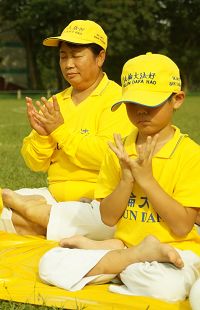 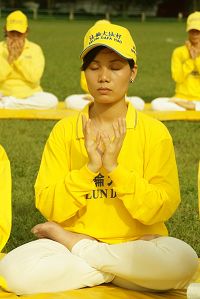