(Clearwisdom.net) Good teachers not only impart knowledge, but they also serve as role models. A teacher with a high moral standard and broad knowledge is well respected by students and parents.

There are many teachers in China that follow the principles of Truthfulness-Compassion-Forbearance, yet the Chinese Communist Party (CCP) has persecuted many of these exemplary teachers since July 1999.

Mr. Meng Fei is a chemistry teacher at the Xinxing Middle School in Cangshan County, Shandong Province. He has received many awards for being an outstanding teacher during his 32-year career as an educator. Three students from his class won national-level first prizes in a chemistry competition, which is a rare honor for a county-level middle school.

Nevertheless, Mr. Meng was held in a detention center twice and sent to a labor camp twice because he practiced Falun Gong. A guard in the detention center once told him, “When I went to your school and asked about you, many people told me that you are a good person and a good teacher. I believe them, but I have no choice but to follow my orders.”

Two guards and two inmates at the Second Men's Forced Labor Camp in Shandong strapped Mr. Meng to an iron chair on September 8, 2009 and beat him. Guard Sun Fengjun hit him hard on his head, chest and ribs. Mr. Meng's nose and mouth were bleeding profusely. He said, “Please do not treat me like this. It is not good for you. I just want to practice Falun Gong and be a better person.” Before he finished speaking, Sun hit him hard on his left thigh. It was so painful that Mr. Meng started screaming. Sun said, “There is a flat board underneath you. No matter how painful it is, your bones will not break. This is the only skill I've learned. No matter how serious your internal injuries are, you will look fine from the outside.” He continued to punch Mr. Meng Fei repeatedly. In the meantime, two inmates behind Mr. Meng pounded on his head, shoulders, back, and ribs. This torture lasted for more than two hours.

Ms. Hou Youfang tortured by one of her students

There are many stories from the Cultural Revolution where students have attacked and humiliated their teachers. Unfortunately, similar things are still happening.

Ms. Hou Youfang, 48, was a physics teacher at the Xipo Middle School in Jinchang City, Gansu Province. She was recognized as an outstanding teacher. When she went to Beijing to appeal for Falun Gong in February 2000, she was arrested and taken back to Jinchang. The school principal Huang Jisheng did not let Ms. Hou resume her duties as a teacher and assigned her to work in the cafeteria.

In January 2001, Ms. Hou was arrested and taken to the Jinchang Detention Center. When she went on a hunger striker to protest, the head of the detention center Hu Dengping used an instrument to forcibly pry open her mouth and then force-fed her. She was ruthlessly beaten and covered with bruises. One of the perpetrators was her student.

Ms. Hou was taken to the Gansu Province First Forced Labor Camp in August 2002 because she would not renounce her belief, and continued to let people know the facts about Falun Gong. Guards at the camp hung her up and severely beat her several times, breaking her arms and legs. It was said that Ms. Hou had severe hemorrhages, broken ribs, a broken pelvis and damage to her internal organs. She died on November 29, 2002. Her body was immediately cremated without notifying her family. The perpetrators were transferred to various posts in other government agencies.

Ms. Lu Hongfeng, 37, was the deputy principal and the head of the Administration Department. She received honors at the district and city level for her outstanding work. She signed a petition letter calling for an end to the persecution in March 2000, which was sent to the National Congress. As a result, she was fired from her workplace, and was arrested at her home by officials from the Lingwu Mental Hospital. They tied her to a bed in the hospital, force-fed her and injected her with a large amount of drugs. According to a doctor working in the hospital, an imported drug from Germany and another pill used at the hospital could make someone sleep for three days. Ms. Lu was forced to ingest 24 of these pills a day. She was tortured this way for 50 days, and died on September 6, 2000.

Ms. Hu Keling, 46, is a teacher at the Laixi City Middle School in Shandong Province. While she was held at the Laixi Detention Center for eight days in December 2005, many of her students' parents went to the school and the police department demanding her release.

Deputy head of Laixi 610 Office, Ding Huijun, and an official from the Laixi Experimental Middle School, Ma Xuejun, led officers from the Qingdaolu Police Station to arrest Ms. Hu in September 2002. They took her to the Mental Illness Division at the Laixi Second Hospital, where she was detained for over three months and forcibly injected with drugs. As a result, Ms. Hu developed mental problems and was only allowed to return home after her family's continued efforts to secure her release. Even six months after her release, her feet were still swollen, and she could not wear anything on her feet. Her finger joints are still swollen and deformed. 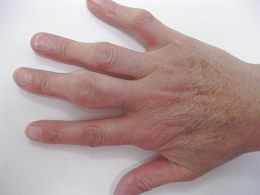 Ms. Hu's swollen finger joints – an effect of being injected with drugs

Mr. Wu Shengli is a Chinese language teacher at the Chuomiao Middle School in He County, Anhui Province. He disciplined himself with the principles of Truthfulness-Compassion-Forbearance. The students in his classes always had very high scores. He did not care about personal gain and often helped with the cleaning and organizing of the shared office space.

Officials from the He Domestic Security Division arrested Mr. Wu on August 31, 2010, because he was seen talking to people about Falun Gong. When he was taken to a labor camp on October 9, 2010, his elderly neighbor was very upset at hearing this news. She said to others, “Even a good person such as Mr. Wu was arrested. What kind of world is this?”

Mr. Ding Fadong is a former music teacher at a middle school in the Yinnan District, Ningxia Autonomous Region, and received a national award for musical performance. When he began practicing Falun Gong in late 1998, the illnesses that had bothered him for more than 20 years soon disappeared.

During Mr. Ding's detention, the guards allowed inmates to torture him at any time. He was put in solitary confinement and tortured on a tiger bench for three days in Yinchuan Detention Center. The room was very small and freezing cold. Mr. Ding was tied up and his blistered hands were cuffed, and his feet were chained underneath the bench.

Mr. Ding was sent to a labor camp three times. A team of more than 10 people had the responsibility of forcing practitioners to renounce their belief, but Mr. Ding did not yield. During that time his wife had to care for their young child. Under very difficult circumstances, she was on the verge of mental collapse and asked for a divorce. When Mr. Ding was release three years later, he had lost almost half of his body weight. His wife remarried him, but due to constant harassment from the police, he decided to leave home to avoid further persecution.

According to information collected up to June 2011, out of the 3,425 practitioners who have died as a result of persecution, at least 320 of them were working in education. They include college professors, principals and teachers.