College Student: A Positive and Hopeful Outlook on Life (Photo)

(Clearwisdom.net) Young people seem rarely to to have anything to do with cultivation. Most who practice qigong seem to do it for personal health reasons; yet, young people represent a large percentage of Falun Gong practitioners. In fact, there are many college students in Taiwan that practice Falun Gong. This is the experience of one such college student.

There are six graduate students who practice Falun Gong in National Chung Hsing University. One of them is Lin Lina, a second year graduate student in the Institute of Plant Diseases Science. She has been practicing Falun Gong for a year and a half, and it has changed her outlook on life. 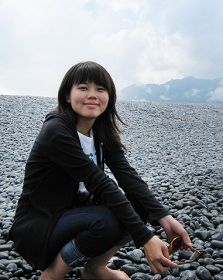 After practicing Falun Gong, Lin Lina knows what she wants and what she should do.

Lin Lina learned of Falun Gong in the summer of her fourth year in college. Her high school friend's father loaned her a copy of Zhuan Falun. She was fascinated by the following sentence, “The entire life of a practitioner has been rearranged. One's palm reading, face reading, birth data, and all messages in one's body are already different and have been changed.” (Zhuan Falun) When she read that, she felt she had found a beacon of hope. Her heart was filled with joy.

Lin was confused about life prior to practicing Falun Gong. People pursue things their entire lives. Why? Everyone goes through birth, old age, illness, and death. Yet, he cannot control his own life. What is the meaning of life? When she read in Zhuan Falun that one's life can be altered through cultivation practice, she felt hopeful and happy. She thought that she might be able to find the meaning of life and be the master of her own life. She was determined to take the path of cultivating Falun Dafa.

Prior to her practice, Lin was easily influenced and wanted to pursue whatever others had. As a result, she often did things half-heartedly and didn't have a firm sense of her own values. She held a strong desire to compete, comparing herself to others and competing with them. There was tension between others and herself. Whenever there was conflict or trouble, she wouldn't admit her own shortcomings. Instead, she always complained about others. The more she complained, the more upset she became. Her mood fluctuated a great deal because of that. When stressed, she would try to talk to others, go shopping, or go out to release tension. However, it only made her more stressed and didn't solve the fundamental problem.

After Lin started practicing, whenever she encountered a problem, she would discover where she fell short by studying the books of Falun Dafa. Then she knew how to correct herself, and it helped solve the conflicts.

One incident impressed Lin the most. Her instructor once criticized her research work sternly. Everyone thought she would defend herself and argue with her instructor. Even though she was hurt, she didn't say a thing about it. Instead, she continued to do her work well. One student saw it and praised her tolerance. Lin knew it was a test of her xinxing and knew how to deal with the problem.

Through her cultivation practice, Lin learned that the purpose of doing things well is not to obtain praise and compliments, nor is it to compete with others. It is to fulfill one's own responsibilities. Through the process of looking inward, she realized that she had the mentality of finishing things in a superficial way and not paying enough attention to the quality. She also had the desire to show off when working on a project. This is what had tired her the most. She realized that the correct attitude is to do what we are supposed to do conscientiously. So, from then on, she gave up her petty mindset and tendency to bicker and tried to be considerate of others. The conflicts were resolved naturally.

She could never have reached those understandings prior to practicing. Lin realized that the key is to do one's own work well. She no longer worries about what people think of her. She worked harder on her research, and her instructor became more confident of her abilities.

Nowadays Lin gets along with others easily. She feels that cultivation has helped her understand herself and change her notions and attitude. As Lin discovered, only then can one eliminate worries and attachments and become a master of his or her own life.

Lin is no longer confused about her life. She knows what she wants and what she should do. She is once again positive and hopeful.