The Brutality of Shen Jianwei and Other Guards at the Xuchang No. 3 Forced Labor Camp in Henan Province (Illustrations)

December 06, 2011 |   By a Clearwisdom correspondent in Jiangxi Province, China

(Clearwisdom.net) Shen Jianwei, 53, is the political head of a division at the Xuchang No. 3 Forced Labor Camp in Henan Province. During the persecution of Falun Gong, many steadfast practitioners who refused to renounce Falun Gong were subjected to severe physical abuse and torture at his hands. The following are accounts of Shen's crimes.

Mr. Zhao Yongzhong was taken to the forced labor camp on December 28, 2002 (lunar calendar). He held a protest hunger strike for more than a month, and was often brutally force-fed. Inmates frequently physically and verbally abused him. The long-term severe torture and abuse mentally devastated Mr. Zhao, and he has been disoriented. The unit's political head, Shen Jianwei, often deliberately provoked, ridiculed, and verbally abused Mr. Zhao. The ongoing harassment has caused Mr. Zhao to become more and more confused.

The perpetrators also deprived the practitioner of sleep on several consecutive days, and denied him of restroom use for seven days. If the practitioner fell asleep, they stabbed him with an awl, slapped his face, shocked him with an electric baton, stomped on him, and forced him to wear earphones to listen to high-volume programs slandering Dafa.

When the practitioner was on the verge of death as a result of the torture, the perpetrators held him up with his head against a wall, and then jabbed his anus with a toothbrush until it bled. They also gagged the practitioner's mouth with foul smelling dirty socks, stabbed him with an awl, and shocked him with an electric baton. They held the practitioner down to the ground, kicked him, and ground his toes with their heavy shoes. 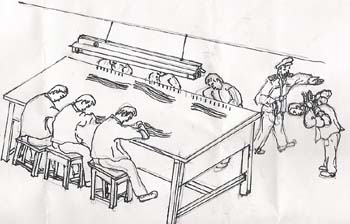