January 11, 2011 |   By a Clearwisdom correspondent in Hubei Province, China

(Clearwisdom.net) Falun Gong practitioner Mr. Peng Liang and Mr. Zhang Jingzhou were illegally arrested in the early morning hours of December 13, 2010. The arrest took place near Dongxihu District Court in Wuhan City. Participating in the arrest were plainclothes police officers who had staked out there. It was Mr. Peng's seventh arrest.

Mr. Peng Liang had a family of five who were all Falun Gong practitioners. During the eleven-year-long persecution, all five members of the family have been subjected to unlawful arrests, home ransacking, detention, brainwashing, forced labor terms, and illegal sentencing. Two of them have died as a result of the persecution, and one has suffered a mental breakdown. 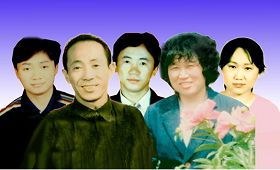 Mr. Peng Min, the younger brother of Mr. Peng Liang, was severely beaten on January 9, 2001 while he was held in the Qingling Detention Center in Wuchang District. The police officers instigated criminal inmates to commit this crime. The beatings left Mr. Peng with a fracture of his limbs and spine, and he died at Wuhan City No.7 Hospital. Twenty-two days later, city and district 610 Office agents took Mr. Peng's mother Ms. Li Yinxiu to a brainwashing facility, where she was beaten to death. Afterwards, the CCTV program “Focal Point” broadcast lies and claimed that Mr. Peng Min “died because he had refused to see a doctor,” and Ms. Li Yinxiu, “died of a sudden stroke.”

The father, Mr. Peng Weisheng, was unlawfully arrested five times, incarcerated in a brainwashing facility eight times, and sent to a forced labor camp twice for refusing to give up his beliefs. He suffered from a nervous breakdown as a result of being severely persecuted during his second detention in the Hewan Forced Labor Camp. He is currently held in the Yujiatou Brainwashing Center in the Wuchang District.

Ms. Peng Yan, the younger sister in the family, was sentenced to three years in prison for remaining steadfast in her belief. While being held in the Wuhan City No.1 Detention Center, guards tortured her twice with a death bed, totaling 39 days. She was later sent to the Wuhan Women's Prison, where she was subjected to all kinds of torture and physical abuse. In December 2001, former Hubei Province Police Department deputy head Zhao Zhifei was given a default judgment by a court in the U.S. following a visit there. He was charged for being responsible for the deaths of Mr. Peng Min and Ms. Li Yinxiu. Provincial and municipal level 610 Office agents instructed prison authorities to try all means possible to “reform” Ms. Peng Yan, in an attempt to cut off the source of evidence that the court needed.

Such a peaceful and harmonious family was broken as a result of the CCP's brutal persecution. Three family members are still alive, but the father and older brother are still illegally detained, while the youngest sister Ms. Peng Yan lives away from home to avoid further persecution.