(Clearwisdom.net) Falun Gong practitioners in Taipei held a march and a candle light vigil in the busiest part of town on July 18, 2010 to protest the 11-year-long persecution of Falun Gong in China. The event called upon people around the world to stand up and help end the persecution. 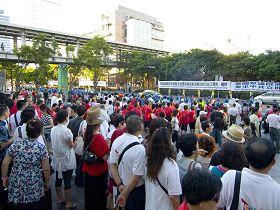 Tourists from China watch the march

Eleven years ago, on July 20, 1999, former Chinese Communist leader Jiang Zemin and the communist regime launched the brutal persecution of Falun Gong and claimed they would destroy Falun Gong in three months. Despite the persecution in China, Falun Gong has developed prosperously overseas. The main book of teachings, Zhuan Falun, is translated into at least 25 different languages. The practice has been spread to over one hundred countries around the world.

Tourists from China Amazed by the Grand March

That morning, bus load after bus load of Chinese tourists dressed in red T-shirts were dropped off in front of the Taipei 101 Building, the second tallest building in the world. There were about 8,000 of them and they came from all parts of China. They saw the banners and displays set up by practitioners on the facts of Falun Gong and the persecution at the 101 Square and the square across the street. When the buses arrived to take them to their next stop, they were reluctant to leave despite the tour guides' advice. Many of them could not take their eyes off the displays. Many of them listened to the practitioners clarifying the facts of the persecution and took the Falun Dafa fliers.

There was a couple who read the displays carefully. When a practitioner explained the persecution to them, the wife had tears in her eyes and could barely speak.

Awaken the Conscience and End the Persecution

Falun Dafa's grand march began at 3 p.m. The Divine Land Marching Band led the march with their powerful and magnificent music. The march drew the attention of the Chinese tourists. Many took out their cell phones and cameras to capture the scene they couldn't have seen in China. When the band played "Falun Dafa Is Good," many of the tourists recorded the performance. A man from Shandong Province sighed, "It's amazing. It's the first time we've seen such a parade. It's impossible to have a parade in China. People get interrogated for chatting together, forget about a march."

They watched the march until it disappeared from their sight.

When those in the buses saw the march, they got up and leaned on the windows to watch it closely.

A tourist from Vietnam wanted to take more informational materials back home to share with his friends and family. He was glad to see the march when he visited the 101 Building. "It was breath-taking. I am so moved. The practitioners are kind, unlike what is reported in the Chinese regime's propaganda. I support people with beliefs."

"It's real people demonstrating," a Chinese tourist screamed when she saw the anti-torture exhibit truck in the march. Another woman took off her sunglasses to see better. When the tour guide rushed them to get on the bus, the woman slowed down and said, "It's a demonstration of the Chinese regime's persecution. The persecution is so evil."

The march ended at 6 p.m., followed by a press conference and a candle light vigil to commemorate those who died because of torture and persecution.

Calls to Awaken Justice and Conscience and End the Persecution

At 7 p.m., 1,000 practitioners wearing yellow T-shirts with candles in their hands sat in the sunset in front of the 101 Building to commemorate and honor those who died in China because of the persecution. Many came to speak at the vigil and showed their support for ending the persecution immediately.

Lin Feng-Jeng, Executive Director of the Judicial Reform Foundation, was touched seeing so many practitioners express their firm belief in their practice. Lin hoped the effort to end the persecution would continue, "The people must support ending the persecution. If we do not support this cause today, who will be the next in line to be persecuted?"

Vice President of the Coalition to Investigate the Persecution of Falun Gong in China (CIPFG), Ken Chiu, said that he felt very heavy and sad for those who have died from torture across the Taiwan Strait.

Legislator Tien Chiu-Chin bowed to the practitioners the minute she stepped on the stage. She said that she could not pretend to ignore the persecution. "Kind people will not allow such a thing once they know the truth of the persecution." She called on everyone to pay attention to the persecution because it was closely related to everyone's freedom and human rights.