Mr. Fu Ziming Died as a Result of Persecution (Photo) 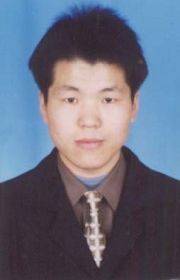 On April 22, Fu Ziming's family received a notice from the Jianli County 610 Office stating that Fu Ziming died in police custody when passing through Jiangxi Province. They were on their way to Hubei Province, where the family lives. Fu Ziming's wife, father and brother-in-law were compelled to travel to Jiangxi Province. While there, the authorities tried to force the family to sign paperwork that alleged that Mr. Fu died from jumping off the train. The intent was that the body could be cremated right away. The family did not believe the lie and refused to sign.

Later, other family members went to Jiangxi Province and signed for the body to be cremated, in consideration of the Chinese tradition that the dead should be put to rest as soon as possible. However, the family had to stay several meters away from the cremation furnace and was forbidden to get close to Fu Ziming's body, whose head and other portions of the body were covered with a cloth. The only visible part was his stomach. It was learned later that the corner of his eyes were covered with tape. There were marks of beating and bruises on his back.

After the family returned to Jianli County, the personnel from the postal office dispatched to bring Fu Ziming back were held at Jianli County Communist Party School (several brainwashing sessions were held in this school) for a study class, to arrange for everybody involved to give the same story. More than ten Hubei Province 610 Office agents and officers from the local police stations were designated to monitor the whereabouts of local Falun Gong practitioners.

Mr. Fu Ziming was born in 1975 into a poor peasant family in Chengji Township, Jianli County. He was weak since childhood, and suffered from pneumonia and chronic cough after having a high fever. Mr. Fu eventually became a college student at Zhongnan Financial and Economic University and started practicing Falun Gong there. He was assigned an accounting position at the Jianli County Postal Office in July 1997.

After two weeks on the job, on July 20, 1999 the Chinese Communist Party (CCP) began the persecution of Falun Gong. Fu Ziming went to the Hubei Provincial CCP office to clarify the truth and appeal for Falun Gong. The Party's oppression of the practice escalated in October 1999. Fu Ziming went to Beijing to appeal for justice, was arrested and held in the Jianli County Detention Center for over 100 days.

Fu Yuecheng and Yu Yihua from the Domestic Security Division arrested Mr. Fu once more in March 2000 and held him in the County Detention Center. While there, Mr. Fu became witness to the torture of a practitioner, Ms. Hu Shunxian in an adjoining cell. The guards taped her nose and mouth, preventing her from breathing. When Fu Ziming heard about it, he shouted, "Falun Dafa is good! Stop beating people!" The guards had several armed policemen beat Fu Ziming and sent him to a solitary cell. Fu Ziming went on a 35-day hunger strike to protest and was brutally force-fed.

Detention center guards used a variety of methods to torture Fu Ziming. Seeing that he would not renounce Dafa, they released him. Several days later, policeman Cao Shengwen went to the postal office to bring Fu Ziming to the police station for "a conversation." Fu Ziming's parents went with him as well, but went home at noon for lunch. 610 Office agents took this opportunity to take Fu Ziming to the Shayang Forced Labor Camp for one year of forced labor.

Fu Ziming was tortured barbarically at that camp, where electric shocking is a commonly-used torture method. During the first three days the perpetrators shocked him twice with electric batons, discharging 800,000 volts. His head was swollen, leaving his eyes, face and mouth distorted. Several inmates once carried Fu Ziming to an office to be shocked with high voltage batons, lasting more than ten minutes each time.

Camp officials employed sleep deprivation as another common torture method. They also forced practitioners to recite notifications regarding Falun Dafa from the Ministry of Public Security and from the Ministry of Civil Affairs, and the so-called judicial interpretation. Fu Ziming refused to do so, resulting in his being deprived of sleep for long periods of time.

After Fu Ziming's term at the labor camp was up, he was dismissed from his job by the Jianli County Postal Office. He eventually remained at the post office as a porter, without a stable income.

Fu Ziming traveled with his coworkers to the Scenic District of Wuyi Mountain on April 17, 2009. While touring the mountain, Fu Ziming "clarified the truth" to people there and posted truth-clarification messages in the hotel and surrounding areas. A hotel staff member reported him. Thus Mr. Fu was arrested by officers from the Scenic District Police Station and sent to Wuyi Detention Center.

On the evening of April 24, agents from the Jianli County 610 Office and from the post office notified the family to go fetch Fu Ziming's cremation urn. When Fu Ziming's mother, sisters and brothers-in-law went to the post office, they were taken away and confined in the Changjiang Holiday Inn without contact with the outside world. Jianli County 610 Office agents tried to persuade the family to state that Fu Ziming's death was due to his jumping off the train. These deceptive officials said initially that the post office would compensate the family with 30,000 to 40,000 yuan. After several rounds of negotiations, the final compensation was for 200,000 yuan, but the Jiangxi Railroad Department "deducted" 20,000 yuan. The family received 180,000 yuan.

Persons who participated in the persecution of Fu Ziming: