(Clearwisdom.net) "Mother has a very strong personality. She argued with her two daughter-in-laws to the point that both of my elder brothers stopped making any contact with her. They wouldn't come to visit her even during the Chinese New Year or other major holidays. My wife and I suffered a great deal living with her, and we nearly divorced. However, my mother's personality changed tremendously, and all of her siblings and in-laws come to visit her. For an 82-year-old, she is quite healthy, and still goes to the fields daily to tend the vegetables. Our home is in Shulin, Taipei." Huang Zhongpeng, 50, sighed with emotion every time he talked about it, "Since she began practicing Falun Gong, our whole family has become harmonious and happy. It is hard to describe the joyfulness." 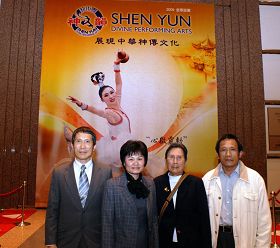 Photo of Huang Zhongpeng, his wife, mother, and eldest brother taken after the Shen Yun Performance at the Taipei International Conference Center in March 2009

If the Chinese Communist Party (CCP) Says It is Bad, Then It Must be Good

Huang Zhongpeng owns a hardware store in Shulin, Taipei. In 1999, he saw the reports on television about the CCP's persecution of Falun Gong; he said "Anything that the CCP represses must be good." At that time, Huang was fond of long distance running. Although jogging is good for one's health, runners may eventually incur injuries, such as a knee strain that may require taking medication for extended periods. He felt very tired every time he finished running. His wife tried to persuade him to give up running, and he thought about doing qigong instead. He considered learning Falun Gong, but didn't know how to get started.

On September 11, 2001, a parade that supported the global emergency of rescuing practitioners in China passed by his store, and his wife said to him: "Didn't you want to learn the Falun Gong exercises?" Huang said: "That's right." His wife ran out to ask the practitioners for information.

Huang called the phone number listed in the pamphlet. The person who answered the phone was very helpful and gave him information about the nine-day lecture series. This is how he became a practitioner.

In October 2001, he received an invitation to attend the nine-day lecture series, but he suddenly felt pain and couldn't get up. He endured the pain and still attended the class. After 2 or 3 days, his pain suddenly vanished.

There was something very strange happening to him. He said: "I always sang "Karla" OK, and drank with business associates. After I began practicing Falun Dafa , I automatically gave up these habits, even when friends were trying to sway me. I also gave up smoking, without even thinking about it. It was so unexpected that I was able to eliminate these two bad habits so easily."

Huang was fond of speculating in stocks and had lost several million yuan. Even so, he continued to speculate. His wife tried to make him quit, but without success. In order to obtain a better understanding of stock trading, he bought a book called "Mastering the Stock Market Instantly." He would stare at the computer monitor constantly to see the market fluctuations from his office.

One day he read about trading stocks in "Teaching the Fa and Answering Questions in Jinan" from Zhuan Falun Fajie - The Law of Zhuan Falun Explained:

"Isn't it better to do some business? Trading stocks is gambling and taking other people's money. Some of those who trade stocks lose everything they have--do you know how that feels? A cultivator should never do this. How could you cultivate yourself with an attachment like that!"

Huang said that he felt Falun Gong allowed one to transform from within. A practitioner is willing to follow the requirements of Falun Gong to be a good person, instead of being forced to change. Therefore, he quickly gave up trading stocks and never touched them again. His wife felt that Falun Gong was miraculous; she had tried various means in the past to change her husband, without success. She never thought that he could quit stock trading after he became a practitioner.

Conflicts Between Mother and Her Daughter-in-Law Were Painful

Huang said: "My parents were in business and our family's financial situation was pretty good during my childhood. Later, my father became addicted to gambling and lost all the family wealth. We became poor overnight. My mother raised all my siblings single-handedly. Mother had a very strong character and always refused to concede defeat when dealing with others. She always used abusive language with my sisters-in-law. My brother and sister-in-law moved out just one month after they got married."

"Mother was a dictator, and harsh. We suffered unspeakable misery every day. For example, mother insisted that my wife hand wash the whole family's clothing, even though we had a washing machine. Mother allowed her to use only the spin cycle. My wife hadn't been well and had several miscarriages, yet mother used abusive language with her. We felt as if we were living in hell. My customers often criticized me: 'You are so young, but you always sigh with agony.' To end this way of living, we talked it over and decided to get a divorce."

"My wife said that hand washing the clothes was just a little thing. What hurt her the most was that she had suffered five miscarriages, but mother had never given her any herbs to nourish her body; instead, she only received abusive language. She said that she felt both mentally and physically tired. Mother never showed any tender love towards her."

"Fortunately, we didn't get a divorce. We started practicing Falun Gong, and our family experienced great changes. Our family became harmonious and happy, and we are together again." Huang said cheerfully: "Sometimes when people get older, they become stubborn, and changing their minds is difficult, but not my mother. There was a great change in her after she understood the principles of the Fa."

Huang said: "Mother began practicing Falun Gong in May 2002. I read the Dafa books to her in Taiwanese, but mother wasn't very diligent in cultivation. Two years ago, a car struck my 80 year-old mother from behind. The driver was terribly frightened. Lying on the ground motionless, she insisted on not going to a hospital and didn't ask for any money from the driver."

"After she got home, she was still in pain and was unable to move. We continued to read her the Dafa books. After twenty days, she was able to get up, and she was able to walk after a month. My relatives heard about her accident and commented that her recovery was faster than if she stayed in a hospital. After this incident, her personality took a great turn and she became diligent in Dafa cultivation. Our family argued less and became harmonious and happy. All my brothers came to visit mother and celebrate the New Year together."

In 2009, Huang and over one hundred Xinhai Hardware company employees and their families went to see Shen Yun performance. After the show, one employee asked Huang: "Does your mother practice Falun Gong?" Huang replied yes. The person said: "No wonder her personality has changed so much and she's so healthy."

"When my wife's brother-in-law was hospitalized, she accompanied her sister on several occasions to Taizhong and stayed for a week each time. During this time, mother cooked our meals,washed the clothes and never complained." Huang said that this would have been impossible prior to her Dafa cultivation.

Even Though She Is Illiterate, She Reads Falun Gong Books

"Mother is illiterate. I translated the Dafa books into Taiwanese so that she could listen. But her personality of refusing-to-concede-defeat compelled her to learn Mandarin and read without asking anyone for the pronunciation of each word. Now she can read any Falun Gong book. It was very strange, because before she couldn't even read a newspaper.

Mother loves to attend Fa sharing meetings to share her understanding with others, since she now understands Mandarin.

She has learned to help others, while not being critical. She isn't argumentative when others have different opinions from hers.

A Taiwanese businessman invested in China for many years, and subsequently had been greatly influenced by the lies from the CCP, and was unfriendly to practitioners. He refused to listen to truth-clarification. Later, this businessman had some business transactions with Huang. He made double payments to Huang for goods 3 or 4 times that totaled two hundred thousand yuan. Huang returned all the overpayments.

After several of these experiences, Huang told him that Falun Gong cultivates Truthfulness-Compassion-Tolerance and that practitioners would never take advantage of others' money. Gradually he was able to listen to the truth. Now he feels that practitioners are all trustworthy to do business with.

Huang's hardware store also provides many machines and tools to other businesses. Firms often ordered goods and requested delivery. Some businesses however, would deny that they had received their goods, and asked for a reshipment. Huang and his deliveryman checked carefully to make sure that there were no mistakes, yet the firms insisted that they hadn't received the goods. Mr. Huang went ahead and sent them another shipment. His employees all understood that since he became a practitioner, he wouldn't haggle over every penny.

Huang's wife attended the nine-day lecture series in June 2002. What predestined relationship did she have with Falun Gong? Due to several miscarriages, she was in poor health and depended on medications to sustain her body. Huang always hoped that she would practice Falun Gong, but she used the excuse that their daughter was too young, so she didn't want to practice.

She often bled a lot during her menstrual cycle, and at times it was so painful that she would roll on the ground and not want to live any longer. She even asked Huang to buy sleeping pills for her, and wished that she wouldn't wake up the next morning. When she saw the changes in her husband, and his mention of the strange feeling from doing the exercises, she would secretly read "Zhuan Falun".

One day she read,

"We teach salvation of both ourselves and others, as well as of all beings. Thus, Falun can save oneself by turning inward and save others by turning outward. It gives off energy and can benefit others. This way, within your energy-covering field others will benefit, and they may feel very comfortable." (Zhuan Falun)

She thought that since her husband did the exercises, that she didn't need to see a doctor. It was beyond her expectation that she hadn't suffered any more pain, and had become healthy. Since then, she hasn't been to a hospital, nor has taken medicine. She felt that Falun Gong was miraculous. What Teacher said: "with one person practicing, the whole family benefits" (Lecture at the Australia Fa Conference, Sydney, May 2-3, 1999, is true. She said that it was absolutely true, since she was an example.

She became a practitioner one month after her mother-in-law started. She said excitedly: "I feel that my life is like a withered flower that starts to bloom again."