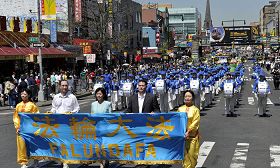 The march started with The Divine Land Marching Band and was composed of three parts: the spreading of Dafa around the world, the persecution in China, and the awakening of sentient beings. It was sunny in Flushing and many people were out on Maine Street in Chinatown. When the procession passed by, people stopped to watch and take photos.

Practitioners held colorful banners in the procession to demonstrate the grace of Falun Dafa, the principle of Truth-Compassion-Forbearance, and the boundless merits of Falun Gong in health improvement and uplifting of character.

Falun Gong appeared on the world stage when the international media outlets reported the April 25 appeal on their front pages in 1999. Within the following ten years, Falun Dafa has spread to more than eighty countries and regions. Zhuan Falun has been translated into more than forty languages.

The persecution of Falun Gong in China

While Falun Gong is widely accepted across the world, it has been brutally persecuted in its country of origin--China--for ten years and the persecution is still ongoing. Facing torture, unlawful imprisonment and death, millions of Falun Gong practitioners remain steadfast in their belief and explain the facts to the world's people peacefully and rationally.

Mr. Qing Song from Beijing came to the USA on a business trip for the first time and saw the march. He was excited and said emotionally, "Nowadays there is no one who does not curse the CCP. Everyone knows that nothing is wrong with Falun Gong and that practitioners just want to practice freely. They are not interested in politics and power. Falun Gong also explains the fact to people via various means. People have now come to know Falun Gong more and more."

Ms. Gao Ming from Fuzhou is a bank teller in Brooklyn. She took photos of the march. This was the first time she saw a Falun Gong march. She said she heard of Falun Gong in 2001 from TV news about the CCP-staged Tiananmen self-immolation incident. She said, "I did not believe it. Later I met some Falun Gong practitioners on the street, and realized they could not do that." She said she has learned more and more about Falun Gong.

Mr. Chen also resides in Brooklyn. He heard of Falun Gong from the April 25 appeal in 1999 for the first time, "I was in high school then. Later I came to know more about Falun Gong. I think the practitioners are very good."