Ms. Ma Xiulan, 69, Dies Due to Abuse in Detention (Photo)

Falun Gong practitioner Ms. Ma Xiulan, 69 years old, lived in the Nanhai District, Foshan City, Guangdong Province. On June 19, 2008, she was illegally arrested and detained in the Nanhai District Detention Center. On January 6, 2009, the Center suddenly notified her family to pick her up from the Guangzhou City Armed Police Hospital. The doctor said she had an incurable condition. Ms. Ma died on March 16, 2009. 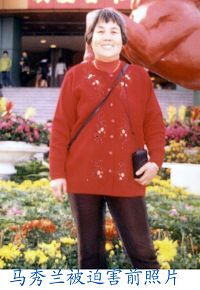 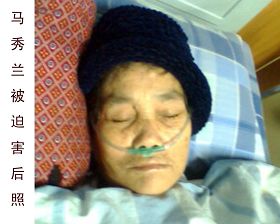 Above are photos of Ms. Ma Xiulan before and after her detention. In only six months, a once healthy woman was abused until she was emaciated and paralyzed.

Ms. Ma Xiulan was from Shandong Province. She came to live with her two daughters approximately a dozen years ago. At the time she was very sick, but she fully recovered after cultivating Falun Gong. She became rosy cheeked and calm in mind. When the evil party began persecuting Falun Gong on July 20, 1999, Ms. Ma went to Beijing to validate the Fa.

The police arrested her, took her to her hometown in Shandong Province, and detained her. After she returned to the Nanhai District, the police locked her up in the Shunde District brainwashing center for two months. Since then she has been followed, closely monitored, and her home was ransacked many times.

On June 19, 2008, Ms. Ma was passing out truth-clarifying materials in the Diejiao Community when she was arrested by officers from the Diejiao Police Station, and detained in Nanhai District Detention Center. She was inhumanly tortured, forced to sleep on the cement floor, shocked with an electric baton, and beaten, resulting in bruises all over her body. She became thinner and thinner, weaker and weaker, until she could not eat or drink, could not have a bowel movement, and became emaciated. The detention center administration never told her family of her health condition. They withheld the money and other items her family sent to Ms. Ma, and did they not notify her family about when she would be put on trial. Her family traveled everywhere in vain to find information about her.

On December 30, 2008, her family went to the court to find out Ms. Ma's trial time and were told that it was that very afternoon afternoon. However, the Procurator told them it was scheduled on December 22, 2008, a few days earlier. At 3:00 p.m. that day, Ms. Ma was carried into the court. She could not walk, and could not recognize her daughter who called out to her. The judge said he would sentence her to three years in prison. Ms. Ma's family asked to post bail for medical parole, but the judge refused.

On January 6, 2009, Ms. Ma's daughter received a call from the detention center asking her to pick up her mother from the Guangzhou City Armed Police Hospital. Her family requested her medical record from the doctor, but were refused. The guards would not allow them to contact the doctors. At the time she was released, Ms. Ma Xiulan was paralyzed and dying. Her family immediately took her to the hospital, but the doctors said there was nothing they could do to save her.

Ms. Ma's friends and family witnessed how this older lady died from abuse in detention, and they are all shocked and very angry.