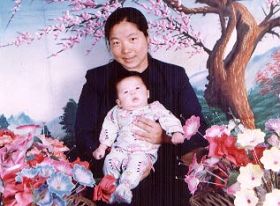 Ms. Yang Hailing and her daughter 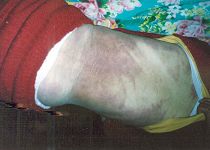 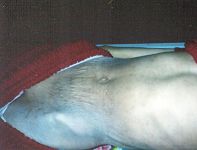 Ms. Yang Hailing's back and abdomen covered with deep bruises

1. Cultivating Truthfulness-Compassion-Forbearance to Be a Better Person

Ms. Yang Hailing was 34 years old and lived in the Donghai Mining Area in Chengzihe District, Jixi City, Heilongjiang Province. Ms. Yang started practicing Falun Dafa in 1998, and soon after, all of her illnesses disappeared. She disciplined herself according to Truthfulness-Compassion-Forbearance. In order to help people be free of the lies spread about Falun Gong, she went to Beijing to clarify the truth and validate Falun Dafa.

She was arrested and detained in a small detention center nearby. At one point there was only her and a male guard watching her. A few days later, this guard tried to rape her. Ms. Yang stopped him with dignity and in an upright manner. When her younger sister found her in this detention center and came to pick her up, this male guard told her, "Your sister is outstanding, because she shook me with righteousness. She educated me every day, taught me the way of being a decent human being, and guided me to the right path."

In the summer of 2001, Ms. Yang's five-year-old daughter was hit by a motorcycle on her way home from kindergarten. Her head and hands were immediately swollen, she lost a big piece of skin on her back, and there was a bad cut on her head. People in the hospital said to Ms. Yang, "That young man who hit her has a rich father that is an official, you should ask him for some money, since your child was hit pretty hard." Ms. Yang replied, "He did not do it intentionally, and we will not ask for money."

The young man and his father asked Ms. Yang many times if there was anything they could do for her family.. She always replied, "I am a Falun Dafa practitioner, I understand you did not do it on purpose. As long as you pay my daughter's medical costs for the treatments she needed, that is all we ask." That father and son were deeply moved. They sent money to her home many times, but every time it was rejected politely. Her daughter opened her eyes in three days, and checked out of the hospital in ten days

In the summer of 2002, Ms. Yang bought a used shirt from a clothing store. She forgot to bring her purse, and the store owner who knew her said she could pay later since she trusted her. Upon returning home, she found 100 yuan in the shirt pocket. She quickly returned the money. The store owner said with a sigh, "I don't know how to thank you! I only make a little money each day. If it were not for you, who would have given me back the money in the pocket? Falun Gong practitioners are good people!"

2. Brutally Mistreated While Clarifying the Truth

On December 6, 2000, Ms. Yang Hailing went to Beijing to appeal. She and many fellow practitioners unfurled a banner in front of Tiananmen Square. Police used a metal chain and wire to corral many practitioners into a circle. If one of them moved, the whole group would suffer extreme pain. They requested to be released unconditionally, and for the torture wire to be taken off. They were transferred to a detention center in Beijing a few hours later, and then released three days later.

In March 2001, Domestic Security agents were following her from a city in southern China back to her home. She escaped capture, so those agents ransacked her mother's home, took away their stereo and Falun Dafa books, then arrested her family. They arrested her in April, detained her in the Jixi City Second Detention Center, and then released her 40 days later after extorting three thousand yuan from her family.

In October 2001, Ms. Yang was passing out truth clarifying materials in Taiping Township, Donghai Mine. Police arrested her and took her to the Hongqi Mine Police Station, then they extorted another five thousand yuan before releasing her. Ms. Yang had to flee home to avoid being arrested again, but 610 Office agents were following her.

In 2002, one month after Ms. Yang returned home from Guangzhou City, two state security agents stormed into her home, took a bag of materials, and arrested her.

She was again arrested on the afternoon of April 25, 2002 at the Mishan City Textile Factory. The police interrogated her that night and brutally tortured her. She could not stand on her own afterward. She was carried to a police car and taken to a detention center. The next day, police officers Ju Hongjun and Liu Xiaohu went to the detention center to interrogate her again. They stabbed her head, body and arms with sewing needles. The police had tortured another practitioner, Wang Yan, the same way. They said this would not leave any bruises on the body. Three other police officers repeated this terrible abuse on the same day, jabbing her from head to toe. Officers cuffed both of her hands together with a thumb cuff, and whipped her with metal wire. She went on a hunger strike, so the guards used an injector to force-feed her mustard oil, which made her cough continuously.

Two months later in June 2002, Political and Security Section heads Meng Qingqi and Du Yongshan from the City Police Department went to the detention center to interrogate Ms. Yang Hailing again, and they tortured her ruthlessly because they had learned Ms. Yang was involved in the production of informational materials about Falun Gong. They handcuffed Ms. Yang from behind and smeared mustard into her nose and eyes. They beat her with their fists, needles, batons, bottles, metal tools and other instruments, such as a broken beer bottle, and heavy metal objects.

The police handcuffed her with two sets of cuffs, one set on her wrists and another set on her forearms. The handcuffs were so tight that they cut deeply into her flesh, and her arms turned black and swollen, yet the police squeezed books between her cuffed arms and her back to make her suffer more. They jabbed her body with a sharp broken beer bottle. Another time while interrogating her, they hung her up by her cuffed hands behind the back, dangling her from a wall from the chain connecting her handcuffs. They also forced her to raise her bottom high with her head pushed down. After one day of such torture, Ms. Yang suffered a torn muscles and could not walk on her own. She was carried back to her cell.

In December 2002, the court put several practitioners on trial, charging them with "attempting to overthrow the government." A few days later, a person from the Jixi City middle court announced their sentencing in the detention center. Ms. Yang was sentenced to 12 years of imprisonment.

At around 9 a.m. on April 12, 2003, Ms. Yang Hailing and three fellow practitioners were doing the Falun Gong exercises in the cell. The detention center director, Ma Baosheng, rushed into the cell with some guards and male prisoners. Ma shouted, "Unfold your legs!" No one moved. He shouted again, still no one moved. Ma Baosheng jumped onto the bed, grabbed Ms. Yang's hair and threw her against the bed board. A loud noise was heard when her head hit and Yang Hailin was rendered unconscious. Seeing her not moving, Ma led his group to quickly leave. Cell-mates placed her on the bed, called her name, but she could only gasp for air. They reported to the guards that Ms. Yang could not talk. Guards replied there would be no help. Since it was Saturday, Ms. Yang had to wait until Monday to be looked at by a doctor.

The next day, April 13, at 1:20 p.m, Ms. Yang Hailin's cell-mate saw a milky fluid flow out of her mouth, and she stopped breathing. Several male prisoners came to carry her out of the cell. Afterwards, the detention center didn't allow any visits from any detainees' family members in order to block the news.

When Ma Baosheng learned of Ms. Yang's death, he notified Ms. Yang's family that she had passed away from heart failure, and that they needed to pay for her medical costs and food. Ms. Yang's mother-in-law said, "My daughter-in-law had no heart disease, how could she die suddenly of heart disease?" Her father-in-law said, "Since you arrested her, you better take care of her bills, because we simply do not have the money."

Ms. Yang's family went to Mishan City Hospital around 10 p.m. The guards left them alone with her body. The freezer worker told them the body was brought in a little after 1 p.m., right after she stopped breathing in her cell. Ms. Yang's family members were shocked upon seeing her remains. She was healthy before her arrest, but her body was now emaciated and disfigured. Her husband fainted several times from shock and grief. They found handcuff wounds that seemed like they were from a long time ago. There were two holes on her body with blood flowing out, and she kept oozing a milky liquid from her mouth until her body was cremated.

At around midnight, the family decided to take some photos of her back. They felt her body was still warm, like a normal person, under both of her arm pits, and on her chest. Did that mean that the detention center personal never tried to resuscitate her, and they had frozen her while she was still alive? Ms. Yang's family could not bear the pain any more. They were trying to find someone to resuscitate her, but no one was around. Ms. Yang's warm body finally became cold by dawn.

Ms. Yang's parents had previously requested to visit their daughter many times, but Ma Baosheng never gave them permission. The death of their daughter shocked the parents so badly that they fainted. Ms. Yang's child cried terribly while clutching her mother's dead body.

While discussing how to handle the funeral with Ma Baosheng, Ms. Yang's family requested to meet with Ms. Yang's cell mates to see if she had any personal belongings, or dying words to pass along. Afraid of the truth being leaked, Ma Baosheng refused their request immediately, saying, "No, her cell-mates will be taken away tomorrow."

The family requested an autopsy to find out the real cause of Ms. Yang's death, and maybe this would show that the detention center was responsible for her death. The hospital colluded with Ma Baosheng and refused to perform the autopsy because the family would find out the certificate stating Ms. Yang died from heart failure was falsified. Ma Baosheng suggested cremating Ms. Yang's remains immediately and the detention center would bear the costs. The family felt it was unfair to agree to the cremation before finding the real cause of death following the appropriate legal procedures.