(Clearwisdom.net) On March 31, 2008, Divine Performing Arts presented the final show of Chinese Spectacular at the Tampere Hall in Finland. The show came to a close with a long, standing ovation from the audience. Guitarist Aleksej Pakkanen was born in St. Petersburg and immigrated to Finland 18 years ago. He wore a traditional Chinese outfit to come to see the show. He wanted to express his fondness for the traditional Chinese culture that the performance showcases. Mr. Pakkanen attended the show two days in a row. 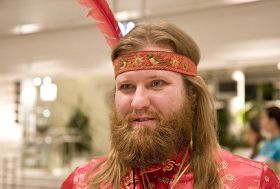 Guitarist Mr. Aleksej Pakkanen said that he liked the show so much that he came to see it again.

Alexej Pakkanen saw the Chinese Spectacular in Tampere for the first time on Sunday. He thought it was so good that he saw it again on Monday. Pakkanen explained why he came to see the show again. "It is really fantastic! I didn't want it to ever end. I don't have words to describe all this. It is like therapy for the soul and one's consciousness, in the literal sense of the word," said Pakkanen. "It doesn't feel different today, but since I know what is going to happen I can focus better on the message and also enjoy it more.

I cannot remember how many times I was brought to tears

Regrading the three Chinese characters projected on the backdrop screen -- "Zhen," Shan, "Ren," (Truthfulness-Compassion-Forbearance), Mr. Pakkanen shared his view, "If you start thinking about this, that is the mind/character/disposition of the universe should be compassionate, joyful and happy. I have been pondering for many years over these basic questions of truthfulness, life and death and so on," Pakkanen continued. "I have made up my mind to live according to truthfulness, and if you live according to truthfulness, you will be a good person automatically, since a truthful person cannot be evil. And then compassion will lead to forbearance. It is like a chain reaction. If you think like this it will bring a peaceful feeling."

The words "Truthfulness-Compassion-Forbearance"touch me deeply

"For example, the performance depicting three women being detained in prison [the dance 'The Risen Lotus Flower'], deeply touched the depths of my heart, and my life's original belief. I believe that if you do good deeds, even if you die, you can also ascend to the heaven after death. I feel the program conveys this important message to the audience. I agree with this viewpoint. 'Truthfulness-Compassion-Forbearance' touched the depth of my life." Mr. Pakkanen said, "I cannot understand what the Chinese Communist regime is afraid of, I feel this kind of belief completely does not pose any threat." He added, "I like the Divine Performing Arts so much, so I have a strong wish to come to see it again! If there is a third show of the Spectacular in Finland this year, I will definitely come and see it. It's a pity that there is no more, but I heard that the Divine Performing Arts will come again next year. It's great, I will definitely come to see it again next year."