(Clearwisdom.net) As the curtain slowly fell on the Divine Performing Arts' second show in Auckland on April 18, the audience of diverse social and ethnic backgrounds celebrated what had been masterstrokes of grand yet engaging art and sweeping epic tales with exciting stories of their own.

Member of Parliament and the Green Party's Foreign Affairs Spokesperson Keith Locke attended Friday evening's performance and said with a smile that the Spectacular was "very open and creative, a huge success, very colorful, lots of fluid movements, lots of variety, quiet relaxing. I am very impressed." 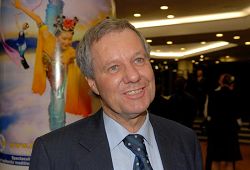 Locke said, "It's truly wonderful that Divine Performing Arts made an effort to visit Auckland. Tonight, many Aucklanders came to see this show, and I think they really appreciate the dances, as I certainly did. The apparently inexhaustible varieties [of dance styles], beautiful and extraordinary colors, and gorgeous costumes, backdrop, and music; everything came together exceptionally well."

Locke said Divine Performing Arts "unwrapped magnificent gems of Chinese culture" that he had never before known of or experienced. He remembered "Drummers of the Tang Court" most vividly. "That was quite ingenious, and the Chinese dances were velvety smooth. I enjoyed it immensely. I think there is a message behind every program, and of course it's important to get those messages across. I do understand the ideas conveyed in the Spectacular."

In fact, he came to the show despite having received a letter from the Chinese Consulate pressuring him to stay away. The letter claimed, "The hidden purpose of the so-called Divine Performing Arts is to smear the Chinese Government." This was a repeat of the pressure exerted last year to stop keep local mayors from attending.

He said, "I think if you believe in freedom of expression and freedom of artistic creativity, there's no way that any politician or any embassy should try and influence people not to see this show. I think the letter they sent to the mayors wasn't the sort of thing an embassy should do."

A press release published on April 15th on Locke's official website http://www.greens.org.nz/searchdocs/PR11753.html, entitled, "Greens Won't be Silenced by Chinese Officials," makes it clear that the Communist Party interference is not welcomed in New Zealand." Also disturbing is the renewed efforts by Chinese diplomats in Auckland to stop VIPs from attending the Divine Performing Arts Chinese Spectacular in Auckland this weekend, on the grounds that it is associated with the Falun Gong, which is brutally suppressed in China".

"Partly to show that we will not be silenced, I will be attending the concert in Auckland on Friday" affirmed Locke, adding, "We must tell Beijing that ... censorship might work in China, because of long prison terms for anyone breaching it, but New Zealanders cherish their right to freedom of expression."