On March 17, former Legislative Member Mr. Lin Chuoshui attended the fifth performance of the Chinese Spectacular in Taipei and spoke briefly with a reporter about his observations. 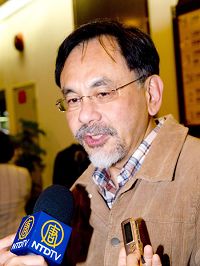 Mr. Lin said it is not very easy to preserve and promote traditional Chinese culture in America, such a modern country, so the Divine Performing Arts' effort is "outstanding."

Mr. Lin said, "Every aspect of the show had traditional cultural components so it is easy for modern people to understand. The programs demonstrated the Buddhist spirit and also related to modern life. The audience was attracted to the familiar historical stories and beautiful art."

He continued, "The Erhu solo was very elaborate and touching. It fully expressed the artist's spiritual world. I could feel the compassion and forbearance in the programs. Each performance was short but informative. In the first dance, there were Western angels and Eastern Buddhas. This shows the tolerance of our culture."