On November 15, 2007, the San Jose Human Rights Commission passed the following resolution to support the aims and intentions of the Human Rights Torch Relay and invited citizens to support this effort, and help stop human rights violations in China.

, The Chinese communist regime has been granted the honor of hosting the 2008 Beijing Olympics with the provision that it improve its treatment of Chinese citizens; and

, Human rights violations have increased since this honor was granted;

, The Chinese regime illegally harvests organs for sale without consent from these prisoners of conscience;

, The Chinese regime continues to attempt to erase the cultures of Tibetans and Muslim Uighurs;

, The Chinese regime forces women to get abortions, even in the third trimester of pregnancy, to enforce the "Once Child per Family" rule;

, The Chinese regime is guilty of murdering more of its citizens than Hitler, Stalin, and Pol Pot combined;

, The Olympic Charter calls for the Games to represent "respect for universal fundamental ethical principles ... the harmonious development of man, with a view to promoting a peaceful society concerned with the preservation of human dignity ...Any form of discrimination with regard to a country or a person on grounds of race, religion, politics, gender or otherwise is incompatible with belonging to the Olympic Movement"; and

, The CIPFG Human Torch Relay is dedicated to righting these wrongs, ending human rights abuses in China, and preserving the Olympic spirit;

, San Jose Human Rights Commission hereby supports the aims and intentions of the

and invite all of our citizens to support this effort, and help stop human rights violations in China. 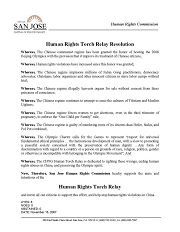