On September 26, 2008, supporters of New Tang Dynasty TV (NTDTV) held a press conference in front of Eutelsat's headquarters in France to once again urge decision makers at Eutelsat not to help the Chinese Communist Party (CCP) propagate media censorship. They demanded immediate restoration of satellite signals for NTDTV and Sound of Hope (SOH) Radio Station to broadcast to China.

At the press conference, Ms. Isabelle Chaigneau, NTDTV representative in France, and Ms. Manhong Chen, representative of Sound of Hope International Radio Station in France, read their declarations to urge Eutelsat not to become an accomplice to the repressive CCP regime. The international community, media, and people who support free information were called upon to defend human rights and freedom alongside NTDTV and SOH. 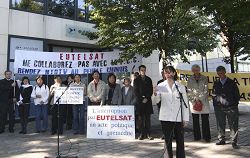 Mr. Yang, executive director of The International Society for Human Rights (IGFM), spoke on behalf of the organization to support NTDTV, "I am here to tell Eutelsat's senior management that we human rights organizations clearly recognize that CCP-controlled China is the country with the worst human rights violations. To sustain its totalitarian tyranny, the CCP brainwashes Chinese people through various channels. In order for the brainwashing to succeed, it does not allow uncensored media into China. NTDTV has been the only media that has broken through the CCP censorship and brought millions of Chinese true news via satellite."

Mr. Yang continued, "Those who follow the honest reporting by NTDTV no longer believe in the CCP's lying propaganda and will not help the CCP persecute millions of innocent victims. Consequently, NTDTV's broadcasts to China have saved a lot of lives. Therefore, I warn senior management at Eutelsat that cutting off NTDTV's signal to China essentially prevents NTDTV from saving people. People's lives are priceless." He asked the CEO of Eultelsat, Giuliano Berretta, to think it over before doing something regrettable just for economic gain. Mr. Yang called upon Eutelsat to do whatever was necessary to immediately resume NTDTV's broadcasts to China.

Mr. Yang handed a petition letter to a department chief at Eutelsat, who promised to submit it to his superior.

According to Mr. Yang, IGFM is the largest human rights organization in Germany. With 30,000 members, it deals with human rights issues in all countries, especially China, North Korea, Cuba, Vietnam, and Burma.

Supporters from Norway, Falun Gong practitioners Ms. Dai Ying and Mr. Li Jianghui, recounted the brutal persecution they suffered in China for their belief in Falun Gong. Ms. Dai was imprisoned for five years and brutally tortured. She lost the sight in her left eye from electric shocks and her right eye was almost blind, too. She was not sent home until she was on the verge of death. Through many trials and tribulations she finally managed to come to the free world. At the press conference, they said that NTDTV was the only TV station in Chinese that dared to report the truth about the persecution of Falun Gong. Since Eutelsat cut off NTDTV's signal, the Chinese people can no longer see the true news and are again being deceived by the CCP's lies. She urged Eutelsat to immediately restore the broadcast signals of the two uncensored media, NTDTV and SOH, and not help the CCP trample human rights.

Ms. Pan Shuzhen from Switzerland reported that, when she helped Chinese tourists quit the CCP and its affiliated organizations in Switzerland, many asked when NTDTV's broadcasts to China would resume. Longing for factual information, these people were anxiously awaiting an early restoration of NTDTV. An elderly gentleman in China used to walk a dozen kilometres each day to another house to watch NTDTV programs. Since NTDTV's signal was been cut off, he still walks a dozen kilometres each day to find out whether the broadcasts have resumed. According to Ms. Pan, after the incident of tainted formula, the Chinese people urgently need to see uncensored news from NTDTV. She urged Eutelsat to immediately restore NTDTV's broadcast to China.

Ms. Jiang Hong from Helsinki, Finland, is a loyal fan of NTDTV and SOH. Some of her relatives also follow these media. Many mainland people she knew said that only these media covered the true news in China, such as the SARS outbreak, the Sichuan earthquake, the Olympics, and Sanlu tainted milk, all of which they only learned about from overseas media, such as NTDTV and SOH. When the Chinese people needed the truth most, the satellite signals of the two media were cut off. Ms. Jiang said, "As overseas Chinese we should help the people in China obtain the rights that they deserve. I urge Eutelsat not to aid the CCP in depriving the Chinese public of the right to know the facts."

Solidarity from a righteous public

The press conference attracted many passersby. They said, "When a free TV station has been silenced, the call for freedom must be heard."

The head of a library in Paris, Ms. Seguin, supported the Chinese in obtaining freedom of the press, "Freedom of speech is a basic human right, a prerequisite for a democratic system where people can gather information and think freely and independently. In my opinion, this kind of protest is very important, especially for the future of China. I support it wholeheartedly. Like China, France is a country with a long history. People in France should support Chinese people's freedom of speech and information. We felt a continuous sense of unease during the Beijing Olympics--the China that we saw was quite apart from the real situation in China."

Molia, who lives near Eutelsat, is from Australia. She said, "I feel that to change Eutelsat's decision, there needs to be a strong voice." She felt this kind of protest was very positive.

A Polish woman living in Germany also came to the Eutelsat protest. With the help of friends she obtained support from more than one thousand people by letting the German public know about Eutelsat's cancellation of NTDTV's broadcasting signal to Asia. She said, "I come to Paris today to support NTDTV, which is a great TV station. I hope Chinese people can see NTDTV again soon. We gained support for NTDTV from many German people and the media, such as WDR West German TV station."

In June 2008, claiming "technical failure," Eutelsat cut off NTDTV's broad signals on its W5 satellite. As a result, its audience in China can no longer watch NTDTV. The two free media, NTDTV and SOH, provide information without CCP censorship, including programs that advocate freedom and human rights and expose details of the persecution that the CCP wants to keep out of the news. Eutelsat bowed to CCP pressure for economic gains and intentionally shut down NTDTV ahead of the Olympics.