(Clearwisdom.net) The organizing committee for the Chinese New Year Spectacular in Chicago has received many proclamations from cities and towns in the Greater Chicago area.

The town of Warrenville was the first in the Greater Chicago area to issue a proclamation to the Spectacular. Upon learning about the upcoming show, Mayor David L. Brummel met with members of the Spectacular organizing committee and said that he would let every member of the city council know about this show at the next council meeting. Within a week, the city issued a warm proclamation:

WHEREAS, Members of the City of Warrenville City Council wish to honor the Chinese New Year the most colorful and important of China's festivals, and,

WHEREAS, the Sound of Hope Radio, an independent Chinese language media, will sponsor a Chinese New Year Spectacular, whose mission is to have the people of the world rediscover the essence of true, traditional Chinese culture through a high-caliber, world-class performance. The 2008 Chinese New Year Spectacular is titled "Myths and Legends" and features 5000 years of time-honored folk tales that illustrate the heavenly cultural gifts bestowed upon China during its long reign of civilization. The artistic presentations feature traditional Chinese song and dance styles that focus primarily on Chinese classical dance, but also include vocal compositions and orchestral music, and

WHEREAS, the Sound of Hope aims to enrich the lives of the public and to promote racial harmony through media pluralism and cross cultural understanding, creating a unifying event for all people interested in Chinese culture; and

NOW, THEREFORE, BE IT RESOLVED, that we, the Mayor and members of the City Council of the City of Warrenville gathered here this 5th day of November, 2007, do hereby extend to the members of the Sound of Hope Organization and the Chinese New Year Spectacular Organizing Committee in Chicago our sincerest congratulations and support for the 2008 Chinese New Year Spectacular festivities, as well as our best wishes for continued success in all their endeavors. 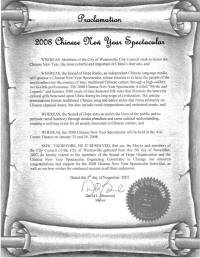 Upon hearing of the upcoming Spectacular to be presented at the Arie Crown Theater in Chicago on January 25-26, Bolingbrook City Council members said that they would proclaim this outstanding show. On the day that the city issued the proclamation, members of the Spectacular organizing committee were invited to the ceremony and gave a brief thank you speech. The letter stated:

"...Sound of Hope Radio is a non-for-profit organization dedicated to facilitate cross-cultural communications between the East and West, and to assist the public in their their for valuable knowledge.

Now, THEREFORE, I, Roger C. Claar, Mayor of the Board of Trustees of the Village of Bolingbrook, Will and DuPage Counties, Illinois, do hereby express our support for the 2008 Chinese New Year Spectacular and encourage residents to attend this very exciting event."

Below is a list of the cities which issued proclamations for the Spectacular: