(Clearwisdom.net) From December 27, 2006 to January 1, 2007, more than 160 Falun Gong practitioners from more than ten European countries gathered in Paris for the first time to practice their musical instruments as a group. At the same time, they appeared together in public for the first time as the European Divine Land Marching Band to perform in the Paris Parade Festival. 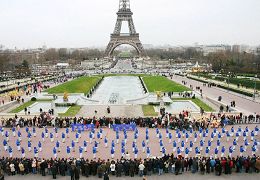 The largest band in the square opposite the Paris Eiffel Tower 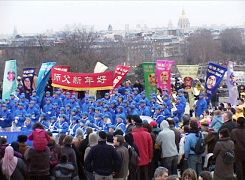 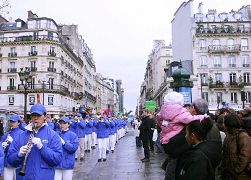 The sponsor of the Paris Parade Festival saw a performance of the Divine Land Marching Band in New York and was deeply touched. He then contacted Falun Gong practitioners in France to invite the European Divine Land Marching Band to participate in the parade festival. The European Divine Land Marching Band had just been set up. Members in four North European countries had just gotten their musical instruments less than two weeks prior. Many practitioners started by having to learn how to read music. A woman practitioner from Sweden who plays flute just started practicing it and learning to recognize the musical notes on December 16, 2006. When performing in the parade festival in Chantilly, a tourist city near Paris on December 31, she stood on the outer row of the band. A spectator on the way walked up to her to listen to her performance. She said that at the time, the band was performing "Falun Dafa is Good," and she was not so familiar with it, but she was not nervous and she was also surprised that she played so well.

Young members in the band 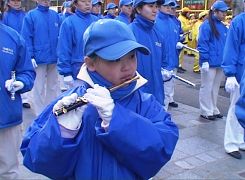 Little Kellin in the band

Maomao who plays clarinet and her father who plays tom-tom are from Stockholm, Sweden. Like several Chinese practitioners from North Europe, Maomao also got musical instrument and started practicing on December 16, 2006. When they finished a three-day group training on December 18, she still couldn't blow well. But after one-day training in Paris on December 27, she was able to cooperate with other members in clarinet group.

The host said: Thanks Falun Dafa

In the afternoon of January 1, 2007, Paris Parade Festival activities were held in the square opposite the Eiffel Tower. The European Divine Land Marching Band was the largest group among many performance groups, more that 160 people, from more than ten European countries, the age span from nine years old children to a seventy years old man. Though it was established only a short time ago, it gained the warmest welcome. After the performance of the European Divine Land Marching Band, the host said loudly: Thanks Falun Dafa! Following that, practitioners performed many times while they were surrounded by many people.

A Chinese person said: Thank you

A practitioner who was standing on the lotus flower float demonstrating Falun Gong exercises, said that she clearly heard a Chinese person shouting very loudly: "Thank you, thank you!" This must have been because of the many Chinese faces appearing in the band, which made this fellow be proud of himself.

"I also must to learn Falun Gong"

When practitioners unfolded the banner reading "Master, Happy New Year!" the whole orchestra band members said, "Happy New Year, Master!" in the same voice. Two children nearby also followed practitioners' voices shouting again and again, the adults who looked after them saw their devoted expression, very surprisingly asked what they were shouting. Practitioners explained to them about Falun Gong, the persecution and the organ harvesting. The lady said after hearing all this, "Marvellous, I also want to learn Falun Gong."