(Clearwisdom.net) On March 19, 2006, Chinese people in Japan and Japanese people from Tokyo and surrounding areas, even Miyagi and Hokkaido, gathered in Abisu Park in Tokyo to support nine million Chinese who have renounced the Chinese Communist Party (CCP) and to condemn the CCP's secret Sujiatun Concentration Camp. Practitioners are tortured to death in the camp and their body organs are illegally harvested for profit. After the rally, the people marched to a park near the Chinese Embassy in Tokyo. Some people continued protesting in front of the Chinese Embassy to condemn the CCP. 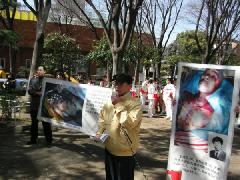 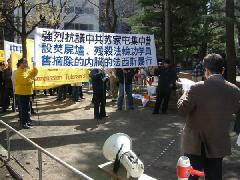 Say No to CCP's barbarity!

A practitioner from the Falun Dafa Association of Japan said, "WOIPFG published its investigation report on March 15, which verifies that a huge human organ business operates in Sujiatun, Shenyang, Liaoning Province. There are sequential operations from organ suppliers' death camp, organ matching, surgical removals, body cremation, to hospitals using the organs. The practitioners whose body organs are harvested are in an isolated camp, and their remains are cremated to destroy the evidence. The CCP is very barbaric. We strongly condemn the CCP's brutality and support those Chinese people renouncing the CCP."

The march started at 2:00 p.m. from the park to support nine million Chinese people who have quit the CCP. Spectators accepted special handouts about the Sujiatun Concentration Camp. A car in front of the march carried a loudspeaker broadcasting news about quitting the CCP. The audience applauded expressing their support.

A Japanese person working for the distribution of Tokyo News said, "Such barbarity cannot be tolerated. Japan's media Asshi and Yomiuri take reports from CCP's media directly, so Japanese people are also deceived by the CCP. The Japanese government also has a responsibility."

A Chinese girl watched the procession and read while smiling, "There is a new China only without the CCP."

A Japanese person following the march said that the CCP is a group of brutal killers, a cult, and a huge terrorist group, and that all people should condemn it.