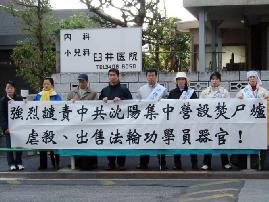 Days ago, a former Chinese journalist disclosed some facts that are shocking and little known to the public. The CCP built a secret concentration camp in Sujiatun, Shenyang City, Liaoning Province where thousands of Falun Gong practitioners have been locked up. The camp has a crematorium. No detainees have managed to leave the concentration camp alive. Before cremation, the internal organs are all removed from the bodies and sold.

The insider also revealed that now there are only a few Falun Gong practitioners at the Masanjia Labor Camp and Dabei Second Prison. Most of them have been moved to Sujiatun. Other practitioners from northeastern China and central China are also being transferred there. The situation is urgent.

Ms. Lianben, a representative of the Japan Falun Dafa Association, said to the reporter in tears, "The CCP has been brutally persecuting Falun Gong for nearly seven years. The number of practitioners verified to have been tortured to death is close to 3,000. Under Jiang's extremely vicious policy of 'beating Falun Gong practitioners to death is counted as suicide,' there might be many more torture deaths that haven't been exposed to the public. Chinese compatriots, be quick to wake up, lend your conscience and justice, and join us to stop this persecution! Otherwise, the Chinese nation will be destroyed at the hand of these evildoers."

Ms. Lianben especially emphasized that the methods used in the secret Sujiatun Concentration Camp are designed to destroy the evidence of their crimes. This reveals its fear of its imminent disintegration and the severe punishment that will follow, because these Falun Gong practitioners are witnesses of the persecution. She called upon people with a sense of justice, the media and human rights organizations to pay attention to, report on and help stop the CCP's persecution of Falun Gong practitioners.

Japanese Falun Gong practitioner Ms. Zhang Yuan said, "We are all Falun Gong practitioners who believe in "Truthfulness-Compassion-Forbearance," but our situations are vastly different due to the difference in the countries we live in. Today is my birthday. I want to stage a hunger strike in front of the Chinese Embassy in Japan to strongly protest the CCP's devilish brutality in the secret Sujiatun Concentration Camp, and stop the evil persecution against Falun Gong practitioners." 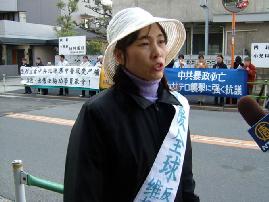 A man working in a Japanese company expressed that when he saw this appalling news on Clearwisdom.net, he trembled with fear, and he immediately told his Japanese colleagues about this terrorist atrocity. His colleagues asked him, "After the CCP collapses, who will be held accountable for this outrageous crimes?"

An incident occurring the day before verified the Chinese journalists special reminder: "Lately, Falun Gong practitioners were beaten in Hong Kong and the Hong Kong Epoch Times print office was smashed. I would like to remind Falun Gong practitioners or groups in Japan to be extremely cautious about their safety." During the evening of March 10, 2006, Japan's Epoch Times administrative office in Osaka was broken into. The perpetrators stole two desktop computers, one laptop and one digital camera. Cash and other valuables were not touched. The police, after investigating the evidence, stated that the burglary was aimed at stealing information.

It is believed that the CCP's killing in the secret concentration camp, and its series of terrorist crimes targeting The Epoch Times, reveal its fear before its imminent demise.