A happy life was ruined by illness

Ms. Guo Qianhua lives in Yilan, Taiwan. As a child in a poor family, Ms. Guo had to give up further study and start working after she graduated from middle school because her family could not support her high school studies. Undiscouraged, she was hopeful that she would eventually continue her studies. In fact, she completed her vocational high school as a part-time student while working part-time to pay her bills.

After graduation, Ms. Guo started an accounting job. However, she never managed to receive a full attendance bonus because she suffered from endometriosis. Every time she had her menstrual period, she would suffer such tremendous pain that she had to ask for sick leave and take a day off.

Ms. Guo got married soon after she was employed, and she had a happy family. Because she was pregnant and carrying a daughter, she decided to quit her job and dedicate her time to her family. In the meantime, she could take care of her father-in-law who had been bedridden as a result of his illnesses.

Later, however, her husband's business ran into trouble, which drove her family into a financial crisis. Ms. Guo decided to become a house cleaner to help support her family. As a result, she had to send her one-year-old child to her mother every day and pick her up after work. Unfortunately, her father-in-law's situation was deteriorating and he had to be hospitalized and taken care of by his family members. Ms. Guo was exhausted and nearly collapsed.

Medicines and operations were futile and Ms. Guo was in despair

Soon after her father-in-law finally passed away and as her daughter grew older, Ms. Guo discovered that she was now truly worn out and terribly ill. In fact, her endometriosis had progressed so much that she could not continue her job. Whenever the terrible pain came, she could not even stand or sit. She had to lie down, moaning with pain for days. Finally, when she could not take it any more, Ms. Guo was sent to the hospital to have a laparascopy.

It is stated in medical reports that endometriosis is a very common disease in women but its root cause is yet to be determined. Also, no medical treatment can eradicate the disease. Usually, medical treatment can only slow down or alleviate the symptoms. There are four degrees of severity in endometriosis, the third one being the development of a chocolate-colored cyst in the ovary - a state in which a surgical operation is often mandated - and this was Ms. Guo's condition.

"After the operation, I thought my suffering would be ended. Instead, I had a relapse after a few months. Even the doctor told me that it could not be cured." Ms. Guo was forced to seek alternatives to improve her health. From diet therapies to qigong therapies, she tried whatever she could find. Without seeing any improvement after various attempts, however, she was about to give up.

The miraculous effects of Falun Dafa 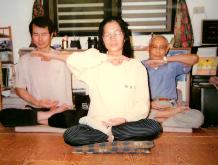 In July 2000, while Ms. Guo was trying to tune the radio to the weather channel for the typhoon status, "I unexpectedly heard an introduction to Falun Gong and its miraculous effects in keeping fit and curing illnesses, as well as how it is able to elevate one's moral values. What fascinated me most was that Falun Gong teachings are free of charge." Ms. Guo could not help picking up the phone and calling the local Falun Gong contacts. To her surprise, there was a practice site in Yilan Park nearby. The next day, she joined the group and started the path of Falun Gong cultivation practice.

In a few short months a miracle happened to her, similar to what she had heard about on the radio program. Without a single pill or any other medical treatment, her endometriosis mysteriously disappeared. Witnessing his wife's tremendous health change, her husband also joined the practice. As a result, the bronchiectasis that he used to suffer from improved and finally went away.

As Ms. Guo said in her experience sharing, she has made significant changes both physically and mentally. First of all, she became free of illnesses after beginning her practice of Falun Gong. "A being who had long been suffering the pains of illnesses finally found hope. I don't know how I can be more thankful!" In terms of the improvement of her xinxing, Ms. Guo said, "I used to be unhappy and lose my temper despite my peaceful appearance. Such temper displays often caused me anxiety and suffering. After I started to practice Falun Dafa, however, I have been able to face conflicts calmly. After conflicts, my heart often becomes even more peaceful. In the face of conflicts between my husband and myself, we both can handle them very well and with an appreciation of the other party."

"Witnessing how I returned to health and that my wrinkles were reduced, many of my friends and family members also followed my steps to practice Falun Dafa." Ms. Guo is clearly delighted when she talks about such matters. "My whole family has certainly benefited from the practice. With millions of practitioners in Mainland China, I'm sure that miracles like mine are not uncommon."

"But out of jealousy and fear of losing power, Jiang's regime launched the cruel persecution against Falun Gong practitioners." Ms. Guo pointed out, "Therefore, I strongly believe that I have the responsibility to step forward to not only validate the greatness of Falun Dafa with my personal experiences, but also to call for more people to help stop the persecution that has been going on for over five years."