Ms. Sun Guilan used to be an employee at the Petroleum Machinery Factory in Baoji City, Shaanxi Province. On the afternoon of October 8, 2001, Ms. Sun was tortured to death after a brutal force-feeding at the detention center of Jintai Police Department in Baoji City. She was only 46 years old at the time. (Clearwisdom has previously reported her death.) 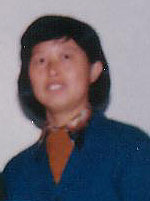 Before she started practicing Falun Dafa, Ms. Sun Guilan used to suffer from an eye tumor and other diseases, from which she couldn't cure even after numerous operations. As a result of these diseases, Ms. Sun had blurred vision, her hair had almost all fallen out, her body was emaciated, and she had difficulty walking. These diseases plagued her for a long time. Each day she felt dizzy and was debilitated from the severe pain she experienced which prevented her from working or doing anything. After she started practicing Falun Dafa, she insisted on studying the Falun Dafa teachings and practicing the exercises daily. She conducted herself according to the Falun Dafa teachings, which she learned by reading the book Zhuan Falun, and which taught her to be a good person and to constantly upgrade her moral character. Soon after starting to practice Falun Dafa, her body exhibited miraculous changes. Her vision returned from 0.1 before she practiced Falun Dafa to 0.4 thereafter. All kinds of symptoms that her eye tumor had caused gradually disappeared. All the illnesses that seemed incurable for a long time, disappeared and her body gradually recovered its health. Her mood and facial expressions also improved. Her face glowed with health and she finally went back to work. Ms. Sun Guilan also helped her workplace and family reduce their respective burdens not to mention saving a large amount in medical expenses. Because of her outstanding work performance, her colleagues and supervisors highly praised her.

After the persecution of Falun Gong started on July 20, 1999, she still insisted on practicing Falun Gong and strictly followed the principles of Zhen-Shan-Ren (Truthfulness-Compassion-Tolerance), striving to be a good person, upgrade her moral character and to cultivate her mind to be more compassionate. Her personal experiences made her understand that Falun Gong is a righteous spiritual practice and can bring people a healthy body and mind. In order to help more people understand Falun Gong, Sun Guilan made truth-clarification materials, distributed flyers, clarified the truth in public and did not fear the authorities.

On October 1st of 2001, because she attended the experience sharing conference that Falun Gong practitioners organized at Caijiapo Township in Baoji City, Sun Guilan was arrested and sent to the Qishan County detention center and was illegally detained there. [Note: Over 50 practitioners were arrested on that same day.] On October 4th, Mr. Lei Zhili, approximately 40 years old and the head of the No. 1 Section of the Jintai Police Department in Baoji City forcibly escorted Sun Guilan and other Dafa practitioners back to Baoji City, imprisoning all of them in the Jintai Police Department detention center. During their detention, persisting in their belief of the principle of Truthfulness-Compassion-Forbearance, Sun Guilan and other Dafa practitioners were not intimidated by the violence, persecution and torture that the authorities subjected them to, including handcuffing and shackling them, etc. Ms. Sun and other practitioners clarified the truth to the other detainees in the detention center and went on a hunger strike to resist the persecution against them. They strongly urged the authorities to stop their persecution of Falun Gong and to immediately release all practitioners that were detained in the detention center.

On October 7th, in front of other detainees, the Director of the detention center, Zhang, along with a prison doctor and a few male guards tied up Ms. Sun Guilan and the other hunger-striking Dafa practitioners in the activity area. They bound them to chairs to force-feed them [Note: That was the 7th day of Sun Guilan's and other Dafa practitioners' hunger strike.] Because Sun Guilan tried very hard to resist the force-feeding, while being bound to a chair, the force-feeding could not be carried out. Under the direction of Director Zhang and that doctor, several male guards surrounded Ms. Sun and used very cruel means to press down on Ms. Sun's head, brutally pry open her mouth, and force-fed her. This made Ms. Sun unable to breathe and she continuously coughed and vomited. Later, when Ms. Sun was carried back to her cell, she still continued coughing and vomiting. On the second day, on the afternoon of October 8th, Ms. Sun Guilan died after being tortured further. The criminal detainees that witnessed the crimes of these evil policemen all cried. Many of them had learned about the facts of the persecution against Falun Gong practitioners from the practitioners that were detained there, and now witnessed this brutal persecution firsthand.