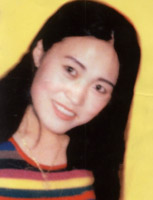 Ms. Li Shuhua, a practitioner from Yushu City, Jilin Province, who died as a result of persecution on October 6, 2003, in the same city.

Li Shuhua's husband Yang Zhanjiu started practicing Falun Gong in 1996. He used to be an assistant at a Falun Gong practice site in Yushu City. Since July 20, 1999, he has been illegally detained and sent to forced labor camps many times. Yang Zhanjiu was sentenced to seven years of imprisonment in April 2004. He is now in Siping Prison, Jilin Province.

"From the time Li Shuhua started practicing Falun Gong in 1996 she enjoyed good health. Her family life was happy. Her two children are very cute, and both attend elementary school.

"After 9:00 a.m. on September 24, 2003, when Li Shuhua was home, officers Jiang Wei, Li Mingchao and one with the last name of Dong from the Peiying Police Station in Yushu City, Jilin Province, abducted Li Shuhua to the station. They deceived her by saying that she would be released after she finished writing a report, but she never returned.

"The police sent Li Shuhua directly to the Xijian Detention Center, where she was subjected to brutal persecution. On October 6 or 7, 2003, they abused her so severely that she died at the detention center. The police didn't notify us until October 9, 2003. At that time I was home alone because Li Shuhua's mother Cui Zhanyun was serving eighteen months of government-endorsed forced labor for her steadfast faith in the practice of Falun Gong. When I heard the police say that Li Shuhua had passed away, I was stunned--they murdered my daughter! She was only thirty-two years old!

"On October 10, 2003, when our relatives and close friends went to see Li Shuhua's remains in the mortuary at the Yushu City Hospital, they recognized that the clothes they had dressed her in were not Li Shuhua's, and it was also obvious that she had been given a face-lift. The doctor who performed the autopsy found a lot of blood in her abdominal cavity; her lungs were swollen, and there was blood on her genital area. But the police said that my daughter had been starved to death.

"My daughter left behind her two young children for whom the government doesn't provide any support. The government sentenced her husband Yang Zhanjiu to seven years of imprisonment for practicing Falun Gong and trying to be a good person."

"My name is Yang Zhanjiu. I live on Peiying Street in Yushu City, Jilin Province. I am a Falun Gong practitioner. I have been illegally detained for one year and three months. My wife Li Shuhua was murdered in October 2003. I am disclosing the truth of the incident as follows.

"My wife Li Shuhua was taken to the Yushu City Detention Center by force on the afternoon of September 24, 2003, for sending me two pages of information from the Minghui Website. Because ten of us practitioners had already been held past our release date, we had protested to the police. The Yushu City Detention Center police evaded responsibility by telling us that they couldn't find a way to let their superiors know about our situation. We had no choice but to go on a hunger strike to protest this kind of illegal detention. On the 25th we started the hunger strike and requested that detention center authorities report the situation to their superiors. The detention center enforcers started to brutally force-feed us on September 28. On September 30 they forced large amounts of concentrated saline solution into our stomachs. After that I felt extremely uncomfortable around my heart. Eventually I vomited. Only then did I realize we had been force fed brine.

"On October 4 the police at the detention center came to force-feed us again. By that time we had been on this hunger strike for ten days. On October 5 my cellmates saw that I was about to die, so they reported it to Xu Hongyan, the officer on duty. He ordered two inmates from the labor cells to carry me to the corridor and force-feed me with sugar water. When I didn't drink this, he ordered the two inmates to hold my arms in place and fiercely punch me in the face. My body was extremely weak at that time. I was punched so hard that I felt dizzy and my face was all red and swollen.

"On the evening of October 6, 2003, Cell No. 10 of the Women's Division reported to their officer that my wife Li Shuhua was dying and had fainted twice. Almost over half an hour passed before the detention center's physician Dr. Li arrived. The doctor told two inmates to carry my wife out the back of the center. They said she was being sent to the emergency room. She was carried back in again after 3:00 a.m. on October 7. For some unknown reason she was sent back before being completely out of danger. On the morning of the 9th, Li Shuhua was again carried out because her cellmates reported that she was about to die. She was sent to the detention center clinic. There they started to torment Li Shuhua, who was already extremely weak. Horrible screams came from the clinic from time to time, as Li Lin from Cell No.14 can testify. They didn't want others to hear so they shut the door, but the screams still could still be heard out in the cells. They then moved her to the backyard and continued the persecution. Li Shuhua never came back.

"The purpose for their abuse was to get Li Shuhua to eat. Only when her condition became critical as a result of their abuse did they send her to the hospital for emergency treatment. That is how she died from persecution. At the beginning of the hunger strike, Officer Teng of the Women's Division threatened Li Shuhua and said, "If she doesn't eat we'll just feed her with saline solution." Teng also ordered Li's cellmates to pressure her and to torment her, using all kinds of methods.

"On October 13, the detention center prepared several special beds for us. They tied us to these beds and inserted tubes through our mouths and into our stomachs for force-feeding. After the force-feeding they didn't remove the tubes so that they could use them again the next day. It was also a way to abuse us. At the time I had a bad headache and my throat was swollen. They told our cellmates to watch us. If we started to show signs of being in critical condition, they were to report it immediately to the officer on duty so that emergency measures could be taken.

"Before September, a criminal inmate named Li Yanchen, who used to be my cellmate, had health problems. The detention center didn't administer I.V. fluids until he was just about to die. His condition didn't improve, so they sent him to the hospital for emergency treatment. He died before he had been given half the oxygen. This is the "emergency treatment" they talk about: only when the person is really about to die do they send him or her to the hospital. Just like that, three people died at the detention center within three months.

"After the tragedy, I once questioned a man named Wang, head of Yushu City's Detention Center, about my wife's situation. He just lied to me, saying that my wife Li Shuhua had been released. I asked other officials and they all said she had been released. They were simply deceiving the victim's family.

"I submitted a letter of indictment to the leader of the Jilin Province Public Security Bureau Fifth Division on November 14, 2003, when he came to the detention center for an inspection. So far I have not received a reply."