Mr. Zhao Yingqi was 59 years old. His family lived in apartment 3 on the second floor of building 84, and in apartment 20 on the fifteenth floor of building 77 in the Nanfan'gezhuang Mine residential area. Because Mr. Zhao Yingqi remained committed to practicing Falun Gong, he was illegally detained in Tangshan City's Hehuakeng Labor Camp from November 20 until he was tortured to death on December 30, 2002.

The camp police told the public that Mr. Zhao died of "natural causes." But we can see that Zhao Yingqi's skull was collapsed, and there was missing flesh in his right rib area; there were two dark bruises on both sides of his hip area and the bruises extended to his back and neck. His eyes were open at his death, and his hands and nails were dark blue. On December 30, 2002, his was very thin in his abdomen area; later his body was injected with water so that he showed some "plumpness." 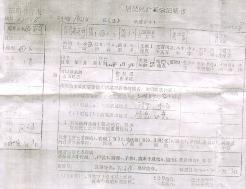 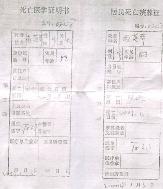 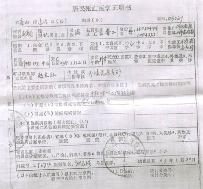 Zhao Yingqi was classified as a "grade 4 handicapped" person due to an injury at work and faulty medical treatment. Before he practiced Falun Gong, he suffered from nasosinusitis and hemorrhoids for over twenty years. After practicing Falun Gong, those conditions totally disappeared. Due to his injuries he depended on crutches and a wheelchair to move around. After he started Falun Gong practice he could ride bicycles and three-wheelers. Although he was nearly 60 years old, many younger people could not keep up with him. He was very healthy, and everyone could see that. However, his death certificate said that he had high blood pressure and suffered a cerebral hemorrhage. He never had suffered from high blood pressure. Furthermore, if he really had high blood pressure, with his pre-existing handicaps, according to the law the labor camp should not have detained him.

When Zhao Yingqi was sent to the hospital on December 30, 2002, he was already dead. The doctors had noted twice to send him to the mortuary. His family could not reach an agreement, so his body was not sent to the mortuary. But on the death certificate, they wrote that he died at 8:02 pm on January 2, 2003. When the report of him being tortured to death was published on Clearwisdom.net, a group of police lead by labor camp head Wang Yongjing went to Zhao Yingqi's home and threatened his family not to release any information about his death to the outside.