On November 23, 2001, Sweden's Falun Information Center and 4 Swedish practitioners held a press conference in a Gothenburg Post Office conference room. These four are practitioners who took part in the peaceful Tiananmen Square demonstration; their names are Pirjo, Yvonne, Roland and Martin.

Reporters from Swedish and Finnish news agencies, including Tidningarnas and Telegrambyr were present at the press conference, which was organized by Sweden's Falun Gong Information Center.

A photo was displayed on the blackboard: 30-some practitioners from 12 countries are raising their hands and eliminating evil in front of the unfurled banner reading Truth-Compassion-Tolerance. This photo records a great and forever historical moment. The reporters all gasped with admiration at the monumental scene. 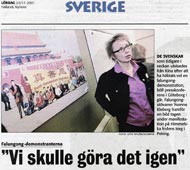 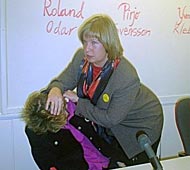 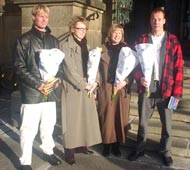 First, a representative of Sweden's Falun Information Center welcomed attendees and read a statement from the Nordic Falun Dafa Association. Then 4 practitioners sitting in front spoke about why they went to Tiananmen, about the course of their peaceful demonstration, about the cruelty of the Chinese police and of their appeal to media and people of the world.

Yvonne said in her speech: We went to Tiananmen for Truth-Compassion-Forbearance, and to tell fellow practitioners in China that we are with them at this difficult time. I wanted to draw the world's attention back to the cruelty spreading in China. Chinese Falun Gong practitioners have been deprived of their rights as human beings. Many of them are forced to wander about in their own country. Even though their voices cannot be heard by the world, my voice can be heard. The persecution not only involves 100 million Chinese practitioners, but also everyone in the world, because Jiang Zemin's regime is attacking Truth-Compassion-Forbearance, which the world needs. As a Falun Gong practitioner and a citizen of the world, I have the responsibility to stand up for these principles.

Pirjo said in her speech: Before we were surrounded by police and police vans, many people in the square saw us meditating and the unfurled banner. Then police dragged us away one by one using violence. We were thrown into the vans. On the way to the police department, a policeman was pressing my head with his whole body's weight. I felt like my neck was broken.

Roland said in his speech: It was more horrifying than watching a terror movie. I thought I would be beaten to death by police in the van. The police did not stop after they pushed me to the ground; they stomped their feet on my head and beat on my face and my whole body. Chinese policemen have all been brainwashed and have no sense of respect for other human beings. They are rude and brutal. You could image what kind of cruelty Chinese practitioners have been suffering.

Martin said in his speech: Chinese police took me to a room and asked me to sign a paper filled with Chinese characters. I told him that I did not understand Chinese and I would not sign. They resorted to cruelty against me. They forced me to be photographed and I refused to obey. Four policemen assaulted me, one on my left, one on my right, one pulling my hair, and one seizing me by my throat. Chinese police are rude and unreasonable.

Other practitioners said the police also tried to take pictures of them, but they all protested and refused. They knew these photos would surely be used in propaganda against Falun Gong.

When reporters asked practitioners about their plans for the future, the practitioners said they realized even more clearly the imminence and importance of clarifying the truth and exposing the viciousness of Jiang Zemin's regime. They will try even harder. They called on the media to be responsible in their duties because every article about Falun Gong will have direct effects in stopping or promoting the persecution of Falun Gong practitioners in China.

The reporters were deeply moved by the practitioners' unselfishness and were shocked by the horror practitioners experienced at the hands of Chinese police. After the conference, they talked to practitioners for a long time and were reluctant to leave.