Recently, Zhang Zhenzhong and several other practitioners were arrested in Tangyin County. The police beat them brutally for more than an hour before sending them to their jail cells. Afterwards, the practitioners started a group hunger strike to protest the inhuman treatment they received by police. The police began to force-feed the practitioners on the sixth day of their hunger strike. Zhang Zhenzhong was critically injured on the fifth attempt to force the feeding tube down his nose and died soon afterwards.

Practitioner Zhang Zhenzhong, male, 22, was an undergraduate student at the Business Administration School of the Shandong Industrial University. In school, he was an outstanding student. At home, he was the pride and joy of his family, and he was beloved by his friends. 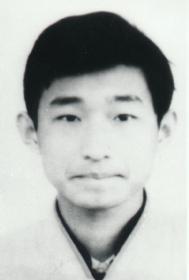 He went back to Beijing to appeal for Falun Gong during the Chinese National Day (October 1) of 2000.

On New Year's Day of 2001, he and another practitioner again went to Beijing and unfurled a banner on Tiananmen Square with the words "Falun Dafa" on it. After he was arrested and thrown into the police van, he unfurled another banner with the words "Truthfulness Benevolence Forbearance" on it. After he arrived at the police station, he unfurled a third small banner. The police flew into a rage and tortured him brutally. They hit him with eight electric batons simultaneously and burned him severely with cigarette butts. This went on for almost twelve hours. The police tried to force him to tell them his name and address, but he refused to do so no matter what they did to him. The policemen from the first police station gave up and transferred him to another police station. In a span of four days, he was transferred to four different police stations. In each police station, he was brutally tortured and sustained extensive injuries all over his body. His injuries were so severe that passers-by did not even dare to look at him. But despite all of this, he still refused to answer any questions and finally escaped with strong righteous thoughts that were as solid as the granite.

He went back to Beijing with another practitioner shortly after the Chinese New Year. They wrote words such as "Truthfulness Benevolence Forbearance," "What happened to Falun Gong is the worst miscarriage of justice in thousands of years," "Clear the name of Falun Gong," and "Restore the reputation of Master Li" near Zhongnanhai (the government compound where many Chinese leaders live), Tiananmen Square, major subway entrances, and telephone booths.

Zhang and other practitioners went back to Beijing yet again during the Chinese New Year of 2001, where they suffered a great deal. In order to save expenses, so that all the money they had could be used to clarify the truth, he sometimes only ate one meal a day. At night, he slept on grass fields covered with snow, underneath the edges of buildings, or on cold concrete floors.

On May 17, he and three other practitioners went to Tangyin County to clarify the truth. First, he wrote "Truthfulness Benevolence Forbearance" on a wall of the temple of Yue Fei (a Chinese national hero from the Song Dynasty). He then distributed truth-clarifying literature along city streets. Several vicious policemen arrested all four practitioners in Chenggang Village and tried to drag them to the police van nearby. The practitioners refused to go with them, so the policemen kicked them to the ground and beat them. Their clothes were torn to shreds from the beating. Zhang Zhenzhong and another practitioner held on to each other so tightly that the police could not manage to tear them apart no matter how hard they beat them. In the end, the policemen pushed the two of them together into the van. Once they arrived at the police station, the vicious policemen conducted body searches by force, confiscated all of their money, and beat them viciously. They then transferred the practitioners to the Tangyin Police Department. On the way there, the practitioners courageously recited the poems from Master Li's Hongyin aloud and were brutally beaten yet again. Despite the beating, the practitioners still managed to maintain righteous thoughts in the face of evil, and the policemen had no choice but to allow them to continue the recitation.

Once they arrived at the Tangyin Police Department, Zhang Zhenzhong and the three other practitioners refused to go to their cells. The four of them held each other's arms tightly and formed into a ball. The policemen used their fists and electric batons to hit sensitive areas on their bodies and kicked them repeatedly in an attempt to break them apart. When they saw that the practitioners were still holding onto each other tightly, they brought in a group of young policemen who were even more vicious and cruel. More than an hour later, the practitioners were beaten so badly that they began to vomit blood from their noses and mouths. The policemen finally managed to break the practitioners apart. They tied the practitioners up with ropes and sent them to separate jail cells. All four practitioners began hunger strikes to protest their detention. On the sixth day, the policemen ordered the inmates to force-feed the practitioners. A practitioner with the surname of Wang witnessed Zhang Zhenzhong being dragged out for the force-feeding session. At that point, Zhang Zhenzhong had been tortured so badly that Wang could hardly recognize him. He looked extremely fragile and weak, yet the policemen still handcuffed him to a chair and repeatedly tried to insert the feeding tube into his nose. They could not succeed in the first four tries. On the fifth try, Zhang Zhenzhong made a painful cry. His body quivered uncontrollably, and he lost consciousness.

When another practitioner was sent to his cell after the force-feeding session, reports were already being quietly circulated in the jail that "someone had just died during a force-feeding session." This was how the young, magnificent life of a charismatic, energetic college student was taken away from him.